0 Bournemouth Bowled over by Primo Maxx 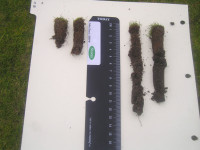 With the weather hotting up there's already talk of another very dry summer. In these conditions bowling greens can suffer badly from lack of water, resulting in stressed, damaged turf which can struggle to recover. But with regular treatments of Syngenta's Primo MAXX turf growth regulator, which is supplied by Scotts, bowling greens have a much better chance of surviving the driest conditions, as Bournemouth Borough Council discovered last year.

The council carried out trials of Primo MAXX on three bowling greens, and results were conclusive. The product protected the turf from dry conditions by increasing root development and reducing clipping yield rate to retain valuable moisture. In short, Primo MAXX helped the turf survive one of the hottest summers on record.

The trials were carried out between April and August 2006, with Primo MAXX applied to two greens situated at Knyveton Park and Moordown Recreation Ground, while one control green at Knyveton Park was left untreated.

The treated and untreated greens at Knyveton Park are located alongside each other and have very similar rootzones composed of sandy loam with identical maintenance regimes, irrigation requirements and nutritional programmes.

Root development was inspected on 25 July and the difference in root length of the treated green compared with the control green was considerable - over double the length - giving improved drought stress within the sward.

A second visit on 29 August was arranged to compare the respective root development on the trial sites. The untreated green had an average root length of approximately 40mm compared with the Primo MAXX treated green root length of 130mm - over three times longer.
Alan Rideout, operations manager for Bournemouth Borough Council, and Chris McMillan, operations officer, monitored the greens' playing performances during the trial period. They were "very impressed" with the improved playing characteristics of the treated greens, with more consistent green speeds for the bowlers throughout the day as well as markedly improved root development.

Clipping yields were cut by up to 50 per cent, which reduced moisture and nutrient loss in the sward and reduced plant stress during the very hot weather during June and July, when temperatures reached on average 30-35°C.

This year, Bournemouth Borough Council is fully incorporating the use of Primo MAXX into their turf management programme for all their bowling greens.