The residents of Bournemouth have no excuse for missing out on their sporting exercise, with 17 individual bowling greens at 12 sites around the borough open for casual play between 10am and half an hour before sunset seven days per week, from the end of April to the end of September.

Sixteen of these bowling facilities are maintained by Bournemouth Borough Council, utilising the expertise of their fine turf greenkeepers who are headed up by Chris McMillan, the Operations Officer.

Chris has been working for Bournemouth Borough Council for 15 years. He started on the grounds maintenance educational round, looking after the school grounds and sports pitches. After working on the schools for 3 years Chris became interested in fine turf and went to college at Sparsholt for four years and achieved NVQ2 & 3 in sports turf maintenance and management.

Last year he obtained NVQ level 4 and hopes to start the IOG National Diploma next year. 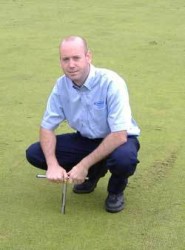 In his role of Operations Officer he takes responsibility for managing 50% all the sports facilities in the Borough, overseeing the needs and requirements of 16 full time staff and an extra 4 seasonal staff in the summer months.

Bournemouth is a unitary authority and maintenance operations are done in house and only involve external contractors when needed. All Chris's staff that are presently working on bowling greens are trained to a NVQ level in sports maintenance or have a number of invaluable years experience.

His responsibilities include the bowling greens, numerous football and rugby pitches and Green Flag awarded Parks within the Borough.

Chris and his staff have transformed the quality and playing characteristics of their bowling greens by paying more attention to thatch levels. An aggressive de-thatching programme has been implemented since the purchase of a Graden Scarifier in 2002.

Previously, the method of removing sub surface thatch on bowling greens was to hollow core twice a year with 13mm x 125mm depth tines at 50mm spacing. While this method was tried and tested, and reasonably successful, the results that they have now achieved with the Graden are outstanding. (See graph)

Chris assesses each and every green and will tailor his maintenance regime to the condition and requirements of the greens. One of his main aims is to promote and maintain a high density of fescue and bents whilst at the same time reducing Poa dominancy.

The Graden is now used once a month during the playing season with 1mm blades on the diagonal. In the autumn renovations they change the rotary shaft to 3mm blades and do two passes.

Chris's biggest problem has been to persuade his staff and the end users that the cosmetic damage after using the machine does not harm the surface. Once the surface has been blown of debris and cut the playing surface is acceptable for play.


Chris has also noted some other added benefits from using the Graden:-

Also, since using the Graden, he has not hollow cored his greens and has noticed a reduction in crane fly larvae. He used to get large infestations on the greens, the cranefly used to lay their eggs in the holes in the soil profile.

With the deeper and increased root mass the grass plant is more able to tolerate drought conditions which, in turn, has reduced the number of times they have had to water the greens this year.

The main benefit, however, has been the ability now to raise and maintain the height of cut at 6mm throughout the playing season and still produce a fast, true playing surface for the bowlers.

Chris's maintenance regime starts in the spring before the season starts when he implements spring renovations - scarifying, topdressing using 3-5 ton per green and over seeding the bare areas. No topdressing is carried out during the playing season as the dressings could possibly damage the woods.

A combination of aeration, scarifying and feeding continues throughout the playing season April - September. This involves the following operations:-