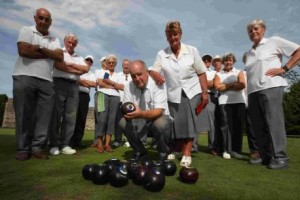 Dedicated Christchurch bowlers will play their last game on the picturesque green this weekend.

Members of Christchurch Bowling Club, who play at the idyllic bowling green opposite the Kings Hotel in Castle Street say a combination of factors including the rundown state of their green, declining membership and a lack of parking among other issues have led to the club's sad demise.

The club formed in 1925 but it is believed a green has been on the site since 1784, used not only for bowls but also croquet.

Steve Burns, men's captain, said: "We've been fighting for so long. Everyone says what a lovely spot; teams love the setting but don't want to play on the green. They think it's a joke.

"We could cope with the other issues - our pavilion turned into a wedding venue and the loss of the crest which was there and parking - if the green was up to scratch. We've lost so many members because of it.

"They don't want to go elsewhere but they feel forced to.

"We've had opposing team stood on the sidelines almost refusing to play because it's so bad."

Mike Poore, president of the club said: "It's got to be one of the most prestigious greens in the country - in terms of its setting anyway.

"But we as a club can't afford to maintain it by ourselves and we need some help which we're not getting."

"This is a wonderful part of Christchurch and to think of it just being allowed to lie empty without anyone bowling on it is so sad."

The last game will be played on Saturday afternoon.

To read the full story follow the link below:
http://www.bournemouthecho.co.uk/news/10641535.Bowling_green_one_of_the_best_in_the_country_but_we___ve_been_forced_to_go_elsewhere__says_club/?ref=rss