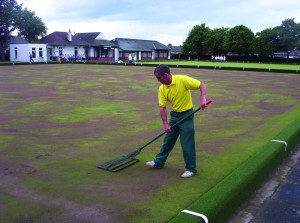 I visited a bowls club recently and was informed that they had been advised not to apply topdressings as part of their annual maintenance programme.

It would seem, therefore, that I have been doing something wrong for the last thirty-five years and, obviously, many others like me. The club had been given reasons not to topdress as follows - it can lead to thatch build up, localised dry patch and it causes the indigenous soil to become inert and devoid of life.

All of these reasons not to topdress have been aimed at bowls clubs where the greens are actually out of play from October to April, a luxury many sportsturf managers would relish; not only resting the green during the most stressful time of the year but also providing more than enough time to deal with all of the negatives mentioned earlier through correctly timed aeration, thatch removal and nutrition programmes carried out, where appropriate, throughout autumn winter and early spring months. So, let's look at the issues raised. 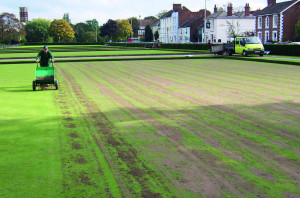 gh topdressing: Yes, possible, if the programme is mismanaged; for example, over applying and burying the grass leaf on a regular basis without carrying out the correct procedures to remedy the situation.

I have grown-in two new golf courses and numerous new greens and, without the use of copious amounts of topdressing on a very regular basis, standards and targets would never have been met. The resulting fibre build-up through such grow-ins will, without doubt, be greater than that of a regular topdressing maintenance programme but, in my own experience, was easily remedied.

I would suggest that quite the opposite is true, in that regular light topdressings actually help to stop thatch building up by diluting vegetation, creating good water infiltration and allowing oxygen to penetrate into the immediate soil profile. When the sand is blended with organic materials, such as peat or compost, microbial activity becomes enhanced, creating an environment suitable for thatch digestion. The microbial populations will feed on the thatch layer and help reduce it over time, when frequent applications are made. g: In its very description, dry patch condition is limited to specific areas of a green. Surely, if topdressing was the cause, we would not be dealing with a patch situation but a more uniform issue across the whole green? Yes, of course, sand, in its nature, is water repellent, but I visit numerous situations on a weekly basis where high levels of sand are being used, yet no dry patch conditions are prevalent.

Dry patch has been thoroughly investigated by many notable organisations, the results of which mainly concur that this condition is concerned with a build-up of a waxy organic coating on soil particles that render the area water repellent. However, through curative, penetrant and residual (polymer) surfactants, and used regularly as part of a integrated management programme that includes, crucially, surface aeration through the summer months on a regular basis, this condition can be overcome to an acceptable level and, in my experience, is not caused by topdressing either with straight sand or as part of a mix with organic content. 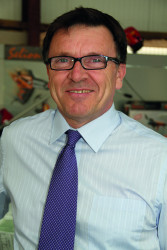 Causes indigenous soils to become inert and devoid of life: Some might argue here with this issue; that most ageing soil profiles, after many years of use are, to some extent, in this situation already, hence the need for biostimulants that are clearly plentiful on the market at the moment. The benefits of topdressing are, of course, widely known and well documented - smoothing the playing surface, soil exchange, assisting in water and air penetration and thatch dilution and degeneration, plus providing protection to the base of the plant during early season play in particular.

As a grow-in tool, it is key and, as the late Jim Arthur said to me during my first golf course grow-in, "these greens will require copious amounts of dressing", and he was never too far from the truth.