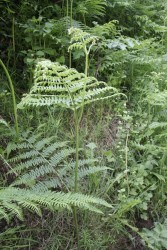 Unusually for a fern, bracken is a very successful coloniser, a vigorous and aggressive plant and is widespread, particularly on neutral to acid soils. In Finland, individual clones of bracken have been dated back to the Iron Age.

PHYSICAL APPEARANCE: Tall soft fern like plants that are normally found poking out of the woodlands or shrub borders.

SITUATION: Originally a lowland grassland and woodland plant it now infests many upland and heathland areas. It is commonly seen bordering sports fields in the woodlands and hedgerows.

Bracken became more invasive following tree clearance and an increase in sheep grazing on upland grassland. The young rhizomes cannot tolerate waterlogging but improved drainage on hills has allowed bracken to colonise formerly wet sites. The upper limit for bracken growth on hills results from the effect of frost and wind on the fronds.

Bracken in coastal areas can suffer salt damage in high winds. The vigorous growth and dense foliage shade out other vegetation aided by the deep litter layer that builds up. The litter gives some protection from frost and from fire. Bracken is a very variable plant and is often separated into different species, sub-species and varieties.

Patches usually consist of several genetically distinct individuals. Bracken can cause poisoning in stock animals although sheep and cattle normally avoid it, as do rabbits. Few birds breed in bracken and it is said to have limited wildlife value.

GROWTH: An extensively branched rhizome system buried 10-45 cm deep. The rhizome system consists of thick storage organs that run deep underground and thinner, shallow rhizomes on which the fronds are borne. A high proportion of rhizomes may be found in the top 23 cm of soil but on deep soils the rhizomes may extend to a depth of over a metre. Individual rhizomes have a lifespan of just a few years but the rhizome system is persistent. The rhizomes are also poisonous and are a potential hazard to pigs that may uproot them and to cattle when ploughing exposes the rhizomes. Extension rhizomes that advance ahead of the main patch may grow more than a metre a year. Biochemical tests to determine the extent of spread for individual plants indicated a maximum dimension of 390 metres

FLOWERS: Bracken does not produce a flower but spores. Bracken is considered a human health hazard due to the carcinogenic spores, so the period of spraying is important and always try to use a telescopic lance to save walking though it.

LEAVES: Fronds generally emerge in May and arise singly from short lateral branches of the rhizome. A dormant bud at the base of each frond can provide a replacement if the main frond is lost or damaged. Fully developed fronds represent just a fraction of the potential fronds. The fronds die off in the autumn frosts. Severe winter frosts kill the apices of the rhizomes and late-spring frosts can damage the emerging fronds. The litter of dead fronds from the previous year provides some frost protection.

REPRODUCTION: Those that develop first in the main flush of emergence become the fertile fronds. Plants need to be 3-4 years old before fertile fronds are produced. Spores ripen from July to August and are shed until October.

A frond may produce several million spores but the sexual phase of reproduction is delicate and requires the right amount of moisture. Sporelings are susceptible to fungal diseases and prolonged frosts.The spores persist in the soil and can remain viable for up to 10 years. The development of new plants from spores requires constant moisture and freedom from frost, conditions that are less likely to be met outside of woodland. Spores are not therefore considered a major source of spread.

CULTURAL CONTROL MEASURES: A number of insect species attack Bracken in Europe. Biological control with the caterpillars of South African moths has been tried in the UK but was unsuccessful. The use of fungal pathogens as mycoherbicides has been investigated.

Cutting is considered less effective because the cut surfaces heal rapidly but is, nevertheless, the most common form of control. Up to the time when the bracken reaches full height but before the fronds unfurl fully, the plant is nourished by food reserves in the rhizomes. Control that relies on defoliation needs to be sustained for several years, but complete eradication is unlikely without additional measures.

Large-scale clearance of bracken on hill pasture is unrealistic without improvements to the husbandry methods that have allowed the problem to develop. A dense vegetation cover needs to be established to prevent bracken returning. Pulling up Bracken plants by hand without the protection of gloves will slice your fingers because the fibres in the stem are very tough and like a knife. I still have a scar to prove it after making a bivouac whilst in the Scouts!

CHEMICAL CONTROL MEASURES: Bracken will recover if control is neglected; so the area must be monitored annually and re-treated by cutting or spraying at intervals as required, maintaining control at reasonable levels or proceeding towards the goal of eradication.

The practical trick is to spray the Bracken for a couple of years and try to push the canopy and activity back into the woodlands. The chemical can be sprayed over shrubs (check the label) without harming them. Rhododendron and Azaleas, so long as not in flower, are tolerant to the active ingredient. More often than not, you will not know how successful the initial application has been until the following early summer when the young plants do not re emerge where you sprayed before.

These selective herbicides have Bracken control listed on their labels - Asulox - Asulam 400g/litre (Bayer E Science)Apply at 11 Litres per Hectare and spray between late June and late August when the plant is in full leaf. Add an Adjuvant to the spray solution as recommended on the label.