0 Brave Brooke's Epic Walk of Thanks 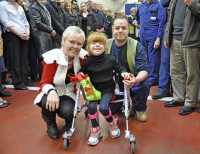 Brooke Lawrance, the brave 7-year old who suffers from cerebral palsy, walked down the gangway at the Ransomes Jacobsen factory just before Christmas, to say a big thank you to all the staff who had helped raise money for her life changing operations in the USA.

Brooke, whose father Peter works at the company's European headquarters on Ransomes Europark, Ipswich was diagnosed with cerebral palsy as a baby and her abiding wish is to be able to walk and play with her sisters, brother and friends.

She is now in the first stages of achieving her dream, thanks to the thousands of donations from friends and well-wishers who have contributed to her charity. Many of those are colleagues of her father's, who have organised many fund-raising events and donated the proceeds to this worthy cause.

Jo Barber, PA to the Operations Director at Ransomes Jacobsen, spearheads the appeal at the factory and said,"We had just celebrated our long service awards, so we had everyone together - about 250 people - and to the surprise of everyone, Brooke appeared and with the aid of her special walking frame, slowly and painstakingly made her way through the throng of employees. There was a prolonged round of applause and hardly a dry eye in the place.

Dad Peter added, "My colleagues have been magnificent with their support, right from the beginning of the appeal; they have organised quiz nights, raffles and anything that will help raise funds. We thought it would be fitting that they saw what they had helped achieve and it was very moving. There were many who were close to, or in tears. There's still a long way to go and so we continue with the fundraising. Brooke's treatment is not funded by the NHS and she's going to need intensive physiotherapy for the foreseeable future, so I'm sure my colleagues will be digging deep again in 2013 and both my wife Sarah and myself are so grateful for their support."

If anyone would like to donate to Brooke's appeal then please visit: www.justgiving.com/brookeswishtowalk

Image: Brooke with her father Peter and Jo Barber, who spearheads the fundraising at Ransomes Jacobsen,
following her epic walk of thanks at the factory