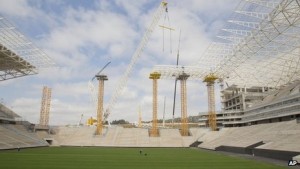 Brazil has admitted all its stadiums still under construction for the 2014 football World Cup will not be ready by Fifa's original 31 December deadline.

Construction problems - coupled with public protests about the money being spent - have delayed the preparations.

The World Cup - the world's biggest football event - kicks off on 12 June in Sao Paulo's Arena Corinthians, where two people died last week after a construction crane collapsed.
'Like marriage'

Earlier this week, Fifa admitted that three stadiums would not be be ready in time. But now Brazil's sports minister has admitted that all six will not be finished by the end of December.

Speaking on Wednesday, Mr Rebelo said: "There are delays but they will not be significant. What matters is that we are ready to go in January."

To read the rest of the story click here