0 Brazilian pitches are ready for this summer´s top event 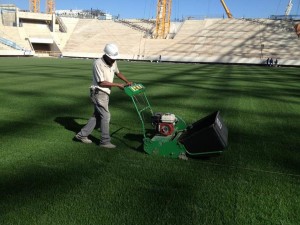 With a few weeks before kick-off in Brazil the pitches are in good shape and fit for play. The pitch preparations have included overseeding with a top performing Perennial ryegrass mixture from DLF-TRIFOLIUM, parent company of the UK's Johnson Sports Seed.

DLF-TRIFOLIUM Export Manager Jan Gottlieb, and General Manager Maximino Santiago Borsi, took a tour of some of the Brazilian stadiums and training centres in early May.

"We have been working on this event for 3 years in close cooperation with grass specialists and the constructors responsible for the pitches. We are in no doubt that this World Cup will present top class grass pitches," said Jan Gottlieb on his return, confident that the pitches will be ready for the World Cup matches in summer 2014.

The heavy wear and challenging growth conditions will put a lot of pressure on the pitches. Football pitches in Brazil are generally Bermuda grass based, but due to the winter dormancy of Bermuda grass the pitches needed to be reinforced with temperate sports turfgrass to provide the perfect and uniform playing surface during the tournament.

The challenge was met by the specialist DLF turfgrass mixture chosen having proven itself to perform exceptionally well under the special climatic conditions, as well as the intense matches expected.

The 4turf™ cultivar in the mixture - a new and innovative turfgrass exclusively available from the R&D stable of DLF-TRIFOLIUM & Johnsons Sports Seed - has been trialled in the UK at the STRI and the final seed mixture thoroughly tested in Brazil by both international advisors & local sports grass specialists.

The pitch preparation process in Brazil has been coordinated by The Local Organizing Committee (LOC). They developed the guidelines and a detailed training programme for pitch managers.

A training seminar with more than 230 participants was carried out in mid-March to explain all the details in the final pitch preparation program.

The LOC ensured that the special grass mixture from DLF was available at all locations hosting the football matches of the World Cup. Starting in April the pitches were repeatedly overseeded with DLF's top performing Turf Perennial ryegrass varieties.

One adviser to the LO 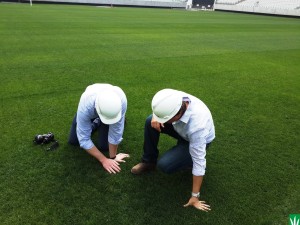 C has been Maristela Kuhn, agronomist and grass specialist, who has trained the pitch managers in the preparation programme.

"There are significant differences in climate and geography at the Brazilian's World Cup locations from north to south." said Maristela.

"Therefore the key challenge has been to define a homogeneous grass solution providing uniform and fair playing surfaces for the football teams.

To secure top quality pitches from kick-off, and all the way up to the final on July 13, overseeding the pitches with a Perennial ryegrass mixture has been an important part of the strategy and preparations."