The visible symptoms of disease that develop on the sward are generally our initial indication that the turf has become infected by a pathogen. However, prior to the development of these symptoms, the pathogen has had to go through a series of different processes both on the surface of the plant and inside the plant cells, in order for the plant to show these detrimental symptoms.

This article is intended to provide a general look at the processes that take place before disease becomes apparent and to look more closely at the ways in which the pathogens have been able to overcome the plants natural defences.

When we talk about the pathogen, we are referring to the organism that is responsible for causing disease. In amenity turfgrasses, the most common pathogens are fungi but, increasingly, we are becoming aware of the role of plant parasitic nematodes (henceforth referred to as nematodes) in the development of disease symptoms. All pathogens are able to overcome the plants defences, enter the plant cells and adversely affect the normal functioning of the plant through induced changes in the plant's biochemistry. These biochemical changes are the cause of symptom development in the plant.

The fungi that cause disease are a diverse group of microscopic organisms that, for the most part, complete their life cycle by producing spores (by either sexual or asexual reproduction) that germinate to produce a mycelium which, in turn, produces further spores or specific resting structures that remain on the plant or in the turf. The conditions that encourage fungal activity and spore production will vary depending on the individual species and the details are well documented in text books such as the Compendium of Turfgrass Diseases, 3rd Ed (APS Press). 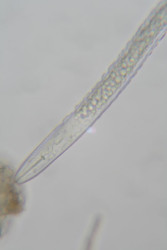 The nematodes that are involved in the parasitism of turfgrasses are also a large and diverse group of organisms that will not be visible without magnification. In addition to their small size, they are virtually colourless, enabling them to become invisible when living in the rootzone or on plant tissues.

There are two main types of nematodes that can potentially cause damage to turf, and these are the endoparasitic (endo- = inside) and the ectoparasitic (ecto- = outside) nematodes. Whether they tend to live and feed inside or outside of the plant, they may also be migratory in their habit, often moving to new feeding sites.

Some nematodes are what we call sedentary, where the adult remains in one feeding location for the duration of its life. However diverse the group is as a whole, nematodes of all species tend to follow the same life cycle pattern. They emerge from the egg as juveniles, often having completed their first moult inside the egg and go through a series of three further moults until they become reproductive adults.

Disease can only develop once the pathogen has entered the plant and, in the case of the fungi, it is either the spore or the mycelium that acts as the infective propagule, allowing the fungus to begin its infection of the plant. In the case of the nematodes, it is generally the emerging juveniles or, in some cases all of the developing stages of the nematode, that initiate the infection but, in both cases, the fungi and the nematodes have developed several ways in which they can enter the plant cells.

Before infection can occur, the turf must become inoculated with the pathogen. The process of inoculation simply means the coming together of the pathogen and the turfgrass host. Fungal spores can be deposited on the leaf tissue, for example, by being wind-blown from previously infected areas, being washed from the air by rainfall or irrigation, transported in clippings or on machinery, or washed across an area in the mass movement of water. Mycelium can grow through the rootzone or across the sward towards to the target plant and can develop from the saprophytic survival of certain so-called facultative fungi (able to live as both saprophytes and parasites), from current infections or from the germination of specific resting structures in the turf.

Nematodes are likely to be naturally present in most rootzones, coming in from adjacent areas, migrating up in to the rootzone from the lower soil profile or they could potentially be introduced during construction or maintenance. However they arrive on the plant surface, inoculation does not mean that disease is inevitable. Pathogens must enter the plant to have a chance of initiating disease and there are three main ways in which pathogens can enter plant cells.
Through natural openings

Stomata, the openings on the leaf surface that facilitate gaseous and water exchange, are an ideal entry point for certain plant pathogens. The stomata open to allow gaseous exchange and to enable water to move out from the leaf to aid cooling and to maintain upward movement of nutrients from the root. Once open, these stomatal pores can be used by certain fungi to allow them to grow down inside the leaf and initiate growth between and through the plant cells. Some nematodes will also enter through these open pores but, compared to the number and diversity of nematodes that penetrate the plant through the root, these so-called foliar nematodes are relatively less important - or at least, are considered so at present.

Entry through wounds on the leaf or root tissues is also a well used entry port for various turfgrass pathogens. Once the leaf tissue is wounded or cut during mowing, the cell content which is high in nutrients, leaks out on to the surface of the sward. Fungal spores may be stimulated in to germination in the presence of this nutrient-rich medium and mycelium may be chemically attracted to the wounded areas.

The quicker the plant can heal itself, the less time the cells are vulnerable to infection, and this is why a clean cut is crucial, especially on turf where disease is already active or when environmental conditions are optimal for fungal growth. Confirmation of this is summarised in a publication by J Harper for PennState University (2008) which reads 'It is essential that all types of mowing equipment be kept sharp and in good operating condition.

Dull, improperly adjusted equipment not only destroys the aesthetic value of the turf by discoloration and bruising of the leaf tips but also provides more ready access for disease organisms and insects through the damaged leaves'.

Although certain pathogens can take advantage of natural openings or wounds on the plant tissues to gain access to the plant cell and begin their colonisation of the tissues, many pathogens have developed methods of direct penetration of intact plant cells. This method of entry means that the pathogen can enter the plant when the conditions are right for the growth of the pathogen and not only when an opportunity is offered by the plant. Certain fungi and nematodes can enter through direct penetration and their methods of achieving this are often quite elaborate and well adapted.

In the case of Microdochium nivale, the spores of the pathogen germinate on the leaf surface by producing one to several germ (germination) tubes within twelve hours from inoculation. The germ tubes then develop in to mycelial networks on the surface of the plant which eventually penetrate the host tissue through growth of specific infection hyphae (Kang et al, 2004). Other pathogens produce specific infection structures, appressoria, which develop from the germ tube and which serve to anchor the fungus to the plant surface prior to penetration. In Colletotrichum cereale (formerly C. graminicola), the pathogen responsible for anthracnose diseases in turfgrass, the germinating spores produce a darkly pigmented (or melanised) appressorium that is of characteristic size and shape.

Following the breakthrough of the plant cell wall, the fungus produces infection hyphae which ultimately grow in to the surrounding plant cells. The fungus Gaeumannomyces graminis (the Take-all patch pathogen) also produces specialised infection structures but, in this case, they develop from the fungal mycelium rather than from the germinating spore.

These infection structures are referred to as hyphopodia and take on a range of shapes depending on the variety of the fungus. G. graminis var. avenae which causes take-all patch disease in cool-season turfgrasses, produces simple hyphopodia whereas G. graminis var. graminis which causes root decline in warm-season turfgrasses, produces distinctly lobed hyphopodia. The shape of these structures is used as one characteristic in fungal identification but, regardless of their shape, these hyphopodia all aid fungal penetration in the same way.

Nematodes also tend to enter the plant cell through direct penetration and they primarily use mechanical force to achieve this. Once the nematode comes in to contact with the plant, it firmly attaches itself onto the outer surface, using a sucker action by pressing its lips onto the plant surface. Once it is firmly attached, the nematode uses the muscles in its head to repeatedly thrust the stylet towards the cell wall.

After a few attempts, the stylet eventually penetrates the cell and the nematode can either feed on the cell content whilst maintaining its body outside the plant cell or it will move in to and through the plant tissues, destroying their integrity as it does so. Nematodes may also release enzymes to help weaken the cell wall prior to penetration and to facilitate feeding once the cell barrier has been breached.

Plants have various physical and chemical defences that they can use to limit infection and to restrict development of disease. Different parts of the plant will support different physical barriers and even cultivars of the same grass type will show a range of susceptibility to infection by various pathogens due to their physical and chemical make-up. Plant cells can also perceive when they have been damaged or invaded and the cells are able to initiate defence mechanisms to contain the activity of any invading parasite.

Susceptible varieties are less well equipped at doing this and will allow a greater amount of infection to develop before they inhibit further movement of the pathogen.

Fungal and nematode pathogens will do all that they can to enter host tissues in order to feed and to complete their life cycle. By ensuring strong plant development, we can limit the opportunity for easy entry of these organisms and help the plant to respond quickly to infection and repair itself. We should not underestimate the complexity of the infection process and the ability of these parasitic microorganisms to breach plant defences in order to obtain the nutrition that is vital for their survival.