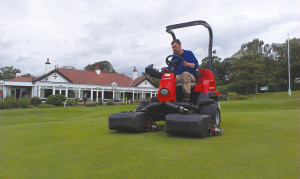 It's been two years since the arrival of the Jacobsen Eclipse 322 hybrid greens mower and, after much anticipation and speculation, it's been a rather pleasant experience - explains Damian Wormald, Head Groundkeeper!

For us the choice of new ride-on greens mower was simple; after purchasing three battery powered Eclipse 122 walk-behinds in 2011, the natural progression was to go with the 322 triplex.

We opted for the diesel-electric version complete with 11 blade XP cutting units and these were equipped with grooved front rollers, front brushes and, of course, powered rear roller brushes; all in all a very good package.

The first thing that I must mention about this mower is the ease of operation; the Eclipse drives like any other triplex; forward/reverse is on the footplate with the PTO, joystick, and independent cutting reel switches all situated on the control arm, where you will also find a small LCD screen. However, this is where the similarities end.

To my knowledge, this is the only greens mower that can give you, the operator, feedback as you are mowing or travelling between greens. The information is displayed on the LCD screen and this ranges from a 'pre-mow' switch check to reel speed, reel temperature, cutting speed; the list goes on and all this information is there to help you …. so my advice to all Eclipse owners is use it!

However, by far and away, the best feature on this machine is the ability to change the frequency of cut (FOC) or to put it another way, the number of cuts per metre. This enables Course Managers to change the FOC to suit their particular ground conditions.

So, how does this work? The speed of the reels is electronically linked to the cutting speed of the mower so, if you set the machine to produce 250 cuts per metre, however fast or slow you go across the green, it will maintain this clip rate.

This differs from a 'standard' hydraulically driven mower which has a constant reel speed of around 2,200 rpm. The slower you drive across the green, then more cuts per metre are produced and, heaven forbid, if you slow down to a virtual stop to remove the flag (I know none of you do this), then you are almost scorching that area of grass!

This doesn't happen with the Eclipse because, as you slow down, the reels slow down, so if you stop to remove the flag, the reels actually stop rotating. And, once you have entered your preferred FOC, it is protected by a pass code that only you are privy to, so it can't be changed by the other members of the team. Using the pass code and the screen, you can adjust the FOC to say 350 cuts per metre and you will remove more grass WITHOUT lowering the height of cut. We've actually done this. What an innovation!

After a few weeks of basic cutting at 'normal' settings, we got down to seeing exactly what this new hybrid triplex was all about. We were familiar with FOC from our Eclipse pedestrian mowers as we use them through the autumn and winter months, but to have the same technology on a triple, this was something else.

First, we sat down and decided that any testing would take place on the same green and we made the easy choice using the 4th, the flattest green we have.

Then we had to decide how to conduct a test. I had read that in the USA to test the Eclipse they cut a single strip, stimped it, changed the FOC, cut another strip, stimp and so on; so that was it, we pinched the idea and off we went.

The machine was set with a FOC of 2.5 and away we went; the first thing I noticed was the 'tightness', a good clean cut moving across the green fairly rapidly and, at the end of the run, the grass boxes emptied and this first strip was stimped and recorded.

The whole exercise was repeated a further five times, looking at the cut, grass collected and the stimp reading. Ranging from 2.5 (400 cuts per metre) down to 1.2 (833 cuts per metre), the changes in FOC can be seen visually, the same tight, smooth finish but, more importantly, more clippings!

Increasing clip rate by lowering the frequency of cut gives a tighter sward, smoother surface and more cuts per metre equates to more clippings removed and an increase in green speed - all achieved without reducing height of cut!

That's got to be a win-win situation for the greenkeeper and raises the question 'will this new type of greens mower eventually kill off the need for low heights of cut?'

In the time we have been using the Eclipse and continuing our good practices such as topdressing, verti-cutting, aerating and brushing, our green speeds have increased, proving that the Eclipse has done the job we were hoping for.

Using the Eclipse, we have easy, reliable greens mowing with the option of changing frequency of cut when you need to: Captains day, club competitions, big visiting parties - the Eclipse covers them all.

Running costs for any machine are a big issue; the cost of fuel and servicing has to be taken into consideration. Jacobsen made a bold statement about the fuel savings when they launched the Eclipse, so again we put it to the test.

After filling the 21 litre fuel tank, we were off; 18 greens plus putting green with perimeter cut (8,600 sq./metres), plus travelling used a miserly 3.4 litres! To say we were amazed is an understatement. The small 2 cylinder Kubota engine to power the generator is superb, bullet proof reliability with the same Kubota ease of access for servicing.

With only three filters to change - fuel, oil and air - plus 2.5 litres of old oil to dispose of, the servicing of the unit is very simple. The main thing for me though as head greenkeeper is that I have no fear of the dreaded hydraulic leak! Possibly the worst thing that could ever happen, those yellow lines burnt into your precious putting surface, those same lines that are still visible weeks after your repair work, the same lines you want to magically disappear!

So, what conclusions have we come up with over the last two years? Well, to say it's the biggest breakthrough in greens cutting technology since the introduction of triple mowing back in 1970s is a bold statement but, in my opinion, it is.

The ease of use, combined with the peace of mind factor of no oil spills, puts the operator's mind firmly at ease. The quality of cut from the Classic XP units, again combined with the flexibility of the FOC, is something ground breaking in the industry. Increase in putting speeds without tampering with the height of cut; what a tool to have in your armoury!

My advice to every greenkeeper is that this technology is here now and here to stay, so embrace it. Don't ignore it as a gimmick that will vanish in a few years, like a lot of the 'new' products that will make the greenkeepers life easier.

Having purchased both the Eclipse 122 pedestrians and the Eclipse 322 triple, I wait in anticipation on how they can improve these models, if possible, and also how they can produce new machines? So, come on Jake, get your finger out; give us a fairway mower!!