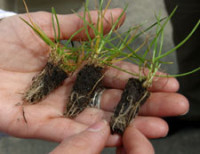 The venue was the headquarters of the Institute of Grassland and Environmental Research (IGER) in Aberystwyth, an independent government funded and supported research organisation, and member institute of the Biological and Biotechnological Sciences Research Council (BBSRC), contracted by BSH to undertake grass seed selection and trials on their behalf. The IGER plant breeders are interested in all of the major grass species used by the U.K. turfgrass industry, the major selection programmes being for Perennial Ryegrass, Slender Creeping Red Fescue and Browntop Bent. But the plant breeders always have an eye for any unusual species that may have particular attributes that the turfgrass industry may benefit from.

The two seed heads are then isolated in a pollen proof cellophane bag , and are left to cross-pollinate. Fourteen to twenty days after cross pollination seed will begin to form. At this stage the two plants are separated and the seed from the emasculated plant (guaranteed to be all hybrids) is left to mature before being threshed out by hand. This is the very first stage to producing a new grass variety. 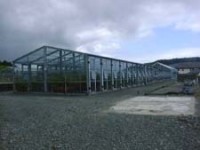 Danny will make several crosses in this way and from each initial cross, he may get between 30 to 40 hybrid seeds. Usually, between 10 and 100 plants will be selected from a group of related crosses which will form the basis of more detailed selection and trialling. This initial selection is done on individual plants grown under field conditions where characteristics like flowering date, plant height, a number of diseases, shoot density and leaf fineness can be measured. Several groups of crosses will be made each year so that at any one time dozens of different populations are being worked on for each of the species that IGER breeds.

These plants are again allowed to flower and are crossed together, but this time transferred to specially designed sealed containment glass-houses which have automatic irrigation and large fans which take in filtered, pollen-free air. This air creates a positive pressure within the houses which prevents inward movement of external pollen even if maintenance access is required.

Seed quantities (up to 250g) at this stage are such that more realistic turf plot assessments can be made. On the basis of these assessments, made over a period of three years, analysis may reveal one or two populations with commercial promise. However, it may be necessary to make further rounds of selection on remnant seed stocks that are stored for each population being assessed, before the desired performance has been achieved. As many as 8 rounds of recurrent selection may be necessary to fix the traits that are being selected, and so it can be many years before a population with real promise is produced. 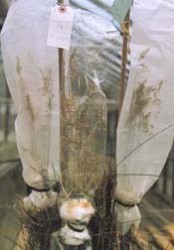 Once Danny has enough information from his plot assessments to suggest that he could have a winning variety on his hands, the process is then passed on to the Seed Production team which is responsible for producing larger quantities of seed. Danny will provide them with about 3000 seeds of the promising variety which are planted and transferred either into pots in a large poly-tunnel, designed in a similar way to the containment houses but on a larger scale, or as spaced plants into a field area for further multiplication.

The field alternative has the advantage of producing larger quantities of seed but isolation from foreign pollen cannot be guaranteed. Having said this, stringent isolation conditions are put in place. Only land that has not had a previous crop of the same species grown on it is used, and sites are chosen where any potential sources of foreign pollen within 200 metres of the crop can be controlled.

In recent years, IGER have been producing varieties in areas in Shropshire and Staffordshire and the Welsh Marches being mainly horticultural areas where potential sources of contamination such as permanent grass pastures are uncommon.

BSH have to register with Defra the previous use of the field. For first generation seed, which we discussed in my first article, the exclusion period is four years. For the production of pre-basic seed and basic seed, the field cannot have had any other grass crop of the same species for up to six years, depending upon species. If it has, then the field cannot be used for this purpose. 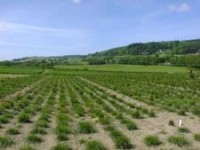 The whole process is cross-checked at every single level by IGER, Defra and us.

For a new variety to be approved, it must meet certain standards and undergoes rigorous testing by the National Institute of Agricultural Botany (NIAB), on behalf of Defra.

Seed samples of the new variety are sent to NIAB where it is tested for Distinctiveness, Uniformity and Stability (DUS). These tests ensure that the variety is distinguishable from any other variety out in the market. They also check the uniformity of the plants that make up the variety and its stability over several generations of multiplication.

Only when a variety has been tested in this way and met certain agreed standards can it be eligible for commercialisation.

The seeds are identified by the official labels on the bag, which are certified by NIAB and Defra. There is Breeders seed which is essentially what we have coming out of the poly tunnel or isolation fields; Pre-basic seed is grown under strictly controlled conditions of purity and isolation which is then sown to produce the Basic seed similar to what we saw in our visit to North Yorkshire in June.

Here at IGER they hold a genetic resources unit, otherwise known as the "Gene Bank" . Essentially they have a unit, which is responsible for collecting plant populations of different grass and legumes species from all over the world. Of these populations, they hold a small amount in cold store controlled for humidity and temperature so the seed can retain its viability for up to 25 years and, in some cases, for up to 100 years. The seed is catalogued by species, by variety if there is more than one, and by the characteristics i.e. if it is particularly shade tolerant. There is also a record of where the seed was collected along with detail descriptions of the site and conditions.

When a breeder is working on a new variety he can refer to the Genetic resources unit to see if they have a species of grass that displays a trait he desires. So, for example, he can look at the Seed Bank listing and choose a similar specie with a characteristic he is looking for. He can then cross that into his breeding line to try and get some of those traits displayed in the new variety.

As far as BSH is concerned we have AberSprite next in line. It is from the same original germ plasm as AberElf and AberImp, produced through recurrent selection of the latter variety. The seed should be available in July 2004. As I mentioned in my previous article, in this instance, we have sent seed over to New Zealand to get it to grow on over the winter to get a seed crop available to the end users as soon as possible. Subject to certification and our own checks, there should be a reasonable supply for next season.

And the way forward? Obviously, we have a good range of wear tolerant varieties such as AberElf, AberImp and AberSprite. We have been working on introducing the Stay Green gene into these varieties and other wear tolerant germplasm sources, and we are probably only about 3 or 4 years away from introducing these to the market.

In addition we have recently released the browntop bent AberRoyal and the Slender creeping red fescue Count. Work is continuing on these species and others including Deschampsias and Kolerias."