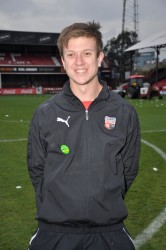 Phil Fifield, head groundsman at Brentford FC, saw his pitch at Griffin Park under snow for more than 10 days during the big freeze.
But thanks to a new treatment from Speedcut Contractors with their Gwazae aerator and soil improvement injection system the pitch has survived unscathed.

Phil (25), who has been at the club for three years, saw the Gwazae in action at Portsmouth FC where he was assistant to Bob Jones for three seasons.

"The results have been remarkable and it is a great way of improving pitch conditions without massive upheaval," says Phil, whose deputy Dan Carter looks after the Brentford training ground.

"The grass actually looks much healthier than it should do after that length of time under snow and covers. This is likely to be a combination of the aeration and the injection of soil improving products.

"Speedcut's machine has been remarkably effective and Barry did the whole pitch in one day."

Treatment at Brentford was with a 600cm-deep probe at .9metre centres incorporating a mixture of calcium, humic acid, a wetting agent and Oxyrush - all products from Floratine.

Says Barry: "It normally takes about five to six hours to do an entire football pitch, using compressed air only. With the products added it takes about eight hours to get the right coverage. A rugby pitch takes about 10 hours."

At Brentford, Phil Fifield carries out rigorous regular maintenance on the pitch, which is largely sandy loam with a centre that tends towards heavy clay. The pitch has been on the same site since 1904.

About six years ago the pitch was Koro'd, levelled and returfed. Since then Phil has sandbanded in the summer months and carries out a weekly spiking with a Sisis Quadraplay during the playing season.

He also does verti-draining every three to four weeks.

Says Phil: "We really needed to relieve compaction at lower depths and incorporate some materials to improved the rootzone. The benefits are very noticeable."

An IOG member, Phil has also worked at AFC Bournemouth and has a diploma in sportsturf management from Sparsholt College.

Brentford FC are in Division One, having been champions in Division Two just two years ago. During the snow two matches were cancelled but two crucial games were achieved as conditions eased.

Tony Ashley, Brentford stadium manager for four years, was at Oxford United for 23 years and manager of the Kassam Stadium for six years. He says: "The team work hard to keep Brentford's pitch playing well and we have been delighted with what Phil and Dan have been doing.

"There is no doubt that maintenance routines keep the surface healthy. The pitch is testament to the hard work that goes into it."

As well as Brentford's pitch, Speedcut has also Gwazae-aerated a total of eight rugby pitches at Harrow School and Dulwich College, including treating some with calcium, humic acids, wetting agents and oxygen booster. 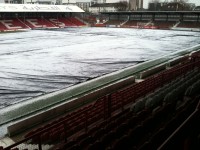 Says Barry Pace: "Working with Phil at Brentford was timed just right before the freeze set in. We are all delighted and very excited with the results and the benefits that have helped the pitch cope with being covered for so long.

"We know the air blast alone dramatically improves the soil's ability to drain and breathe but the ability to incorporate products to target specific problems allows us to further enhance water and air movement, soil structure and additionally boost the soil 'web', all improving grass health.

"If drainage is a problem you will still need to drain although we can improve conditions in the meantime. For compaction, aeration pans and improving soil structure the Gwazae is proving an excellent remedy.

"This is a very busy time for us and we are able to continue Gwazae-aerating in wet weather using our special tyres, providing the soil conditions are right."