The perfect location has always been the key to successful property development. The well-worn mantra location, location, location was as true in the 11th century as it is today. As you enter through the gated estate along the approach to Rockingham Castle, it is immediately obvious that William the Conqueror was guided by this same principle when he demanded that a castle be built on this picturesque spot; still beloved today for its stunning views across Leicestershire's Welland Valley.

In its early years, Rockingham Castle was an essential stronghold for William, instrumental in keeping order across his kingdom. Today, the castle remains in remarkable condition and hoards of visitors flock to it each year to enjoy the castle grounds and its vast 400-acre grounds. 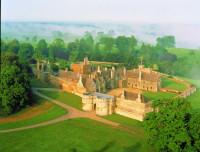 The modern Rockingham Castle is home to James Saunders Watson, and has been his ancestral family's home for 450 years; prior to this, the castle was held by the Crown. Remarkably, Rockingham is one of the only castles in the country that has been continuously occupied for nearly 1,000 years and, within that time, has been owned by just one family since being relinquished as a royal property.

Today, Rockingham Castle operates like many other large estates and country houses, with a mix of tourism, stalking and shooting and corporate events key to its continued success and prosperity.

A big part of Rockingham's annual calendar is also the hosting of key international competitions, one of the most high profile being the Brigstock Horse Trials, which was staged at the castle for the second year this May, welcoming professionals from nearly thirty nations to compete in, what is, a blue riband event in the equestrian world.

The hosting of such a notable riding fixture was something of a baptism of fire for the Rockingham Castle estates management team when the venue took over the staging from Fermyn Woods Estates in Northamptonshire, prompting wholesale investment in the site's infrastructure to prepare for the annual showcase. "It was a massive coup for us to be granted the hosting of the Brigstock Horse Trials, won largely because of the wide appeal of the castle and our suitability for staging such an event," explains Andrew Norman, Chief Executive at Rockingham Castle and Horse Trials Administrator for the Brigstock Horse Trials.

Whilst the inaugural hosting was hailed as a success by eventers and visitors alike, behind closed doors the preparations for the event proved to be a steep learning curve for the venue, whose staff were largely working with no precedent regarding the running and logistics of the operation.

"The layout and the flow of visitors was probably the most significant change on the first year," explains Andrew. "The event attracts thousands of guests, both equestrian and non-equestrian visitors and, in our first year, I think we underestimated the appeal, particularly among the general public."

"In the first year we had no entertainment zone for guests, a situation we remedied this year with the introduction of our entertainment arena. Attendees across the estates management world, farming, land owners and the equestrian set was high in its first year, but the visitor numbers were up 70% across the three days this year, which showed we hit the nail on the head."

"The first two years have proven that Rockingham Castle is an extremely popular venue among the professionals, largely because it's an old fashioned style long galloping course, without the ferocious turns and hairpins commonplace at other venues in the jumping calendar."

"Together with the elegant layout, the course boasts an array of attractive, yet challenging jumps and the openness of the course has also garnered high praise. The water jumps have proven particularly popular and, when exiting out of the jumps, riders can enjoy the beautiful scenic setting - the picturesque rolling countryside being one of the real draws of the course."

Whilst it may be a twelve month programme to prepare the grounds for the show, the three weeks in the lead up to the event is where the work really gets going. The man at the helm - in charge of tending to and organising works across the 400 acre site - is Head Forester, Brian Lewin who, alongside his small team of four, is charged with delivering the on site duties spread across the three event arenas, three dressage arenas, three main arenas and cross country course which makes up the Brigstock Horse Trials programme.

Just over a week after the 2014 event draws to a close, Andrew is busy making his master plan for next year, arranging the sponsors, volunteers and ensuring any renovation works are planned in well ahead of time. This year proved to be smooth sailing for the organisers, with much of the serious investment taken care of in the run up to 2013.

In preparation for the debut show, the big investment centred around two major requirements for the hosting: an updating of the castle infrastructure, to facilitate the better access; and to improve the drainage in key event spaces.

"Drainage has always been one of our biggest problem areas," explains Brian. "Before 2013, it was fairly manageable, day-to-day, to accommodate the usual visitor numbers but, where you're catering for thousands of guests and vehicles in excess of twenty tonnes carrying valuable horses, it's vital that you have the logistics in place to cope with it."

"Improving the access roads and the drainage was something that had been on the back burner for several years, but it had never been a pressing concern. When we won the hosting of Brigstock, it prompted us to take action as the long term hosting of the event is what we are looking to achieve. To meet the needs of the influx of visitors, we installed several miles of new drainage, new ditching, repaired and reinforced a number of access roads and rebuilt an access bridge that could cope with heavier vehicles."

The rugged and undulating Leicestershire countryside is certainly one of the biggest draws for visitors and those looking to host events but, for navigating on a daily basis, the characteristics of the site makes the staff's job a challenge, which means the right choice of vehicle is essential for daily operations.

There's little in the way of fine turf requirements for Brian and his team and, as 2,800 acres of land is devoted to arable farming, it means there are limits to the volume of development possible here, so staff need to be able to arm themselves with the right tools for the job to cope with a more unmanaged environment.

The lifeblood of operations here is the choice of vehicles; those that can handle rough terrain and offer support when hosting events, shooting or at the horse trials is vital for the estates team. Utility vehicles have become an integral part of estates management in recent years, whilst also growing exponentially in the turfcare sector due to their practicality and storage capacity.

Brian, like many of his counterparts, made the move from quad bikes to utility vehicles when growth in the market kick-started in the middle of the last decade.

He and his team took the plunge and made the switch eighteen months ago, investing in a Kubota RTV900, acquired through local machinery dealer Euromec - one the UK's largest supplier of municipal and grounds maintenance machinery - which is also a keen sponsor of the Brigstock Horse Trials.

"We didn't really know what to expect when we first got hold of one, but our decision to trial a utility vehicle, rather than opt for another quad was primarily one of safety," he explains. "The site is extremely diverse in terms of landscape and undulation, so we need equipment that is robust enough to cope with the terrain."

"In the last decade, there has been some high profile accidents and a few fatalities as a result of quad bike accidents, so, across the industry, questions have been raised over their safety and whether we should really be using them anymore at all, certainly for the tasks we demand of them."

"Coupled with the safety aspects, there's also a degree of impracticality with quad bikes. We need to be able to carry loads and have access to shelter when out and about. If the heavens open and I'm out at the furthest corner of the site, it's nice to have the option of a cab and some cover," he explains.

Ultimately, the winning factor for Brian, and the reason why he opted for Kubota's vehicle and not one of the other trialed machines, was because of the robustness of their utility range. "The risk of tipping is a very real one and, in many instances, the utility vehicle is the only kit at our disposal for certain terrains, so we need to be able to push it to its limits in rain, snow, wind and ice, without the fear of slipping and sliding. Hydrostatic transmission is a vital component for any utility vehicle; it must be able to stop on command to avoid the risk of losing control."

In addition to the lone RTV900 that is a permanent fixture on site, Rockingham also loaned three additional models from Euromec for the duration of the event to ferry organisers around and assist with the setting up and dressing down of the arena, dramatically reducing the time taken by staff to tackle it manually or with a more cumbersome 4x4.

Whilst the Brigstock Horse Trials is now the grandstand event in the Rockingham Castle calendar, the venue plays host to many events throughout the year; the Kennel Club's International Agility Festival, "The Suffering", and a Rolls Royce owners event which draws visitors from across the globe to showcase their prized motors - being two of the biggest draws.

Aside from such events, which occupies much of the castle staff's time and efforts in organisation and logistics, the castle itself continues to be a highly popular tourist attraction, with swelling visitor numbers peaking at 28,000 in 2013; the highest the castle has reached in over a decade. The site is also complemented by numerous corporate extras, including the Experience Land Rover Discovery course, which has been used a number of times to put utility vehicles and quad bikes through their paces, as well as for its primary purpose of trialing new Land Rover models.

Perhaps the two biggest challenges for Brian and his team are forestry management and staying on top of pest control and wildlife maintenance, of which there is much to contend with. The castle's owner, James Saunders Watson, has a keen interest in trees and has embarked on his own quest, over a number of years, to plant a mix of traditional species on site, including larch, evergreens and beech - the latter being one of the most problematic species to manage. Since 2000, 8,000 saplings have been planted in, including the establishment of new one acre Jubilee Wood.

"One of our biggest pests are grey squirrels, which cause untold damage to the beech trees, stripping the bark from the top, which ultimately kills the tree over time."

"Staying on top of the grey squirrels is vital, but it really needs a concerted effort from surrounding estates too, otherwise they can quickly populate the area again. Ultimately, our long-term goal is to reintroduce the red squirrel back into the area, following the lead of other pockets in UK, like areas of the north west, which has led to successful breeding programmes of red squirrels."

"We have an excellent track record of investment and a commitment to always improving the castle to make it a place that can nurture ecological development on the one hand, whilst being equally capable when delivering major events with international appeal - our success with Brigstock has proven this."