0 Brisbane: That cricketing epicentre of humidity, storms and bad decisions 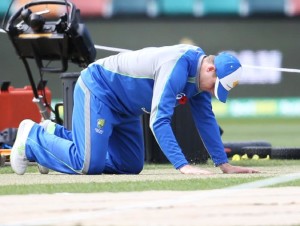 Ahead of the day/night Test between Australia and Pakistan in Brisbane, Nasser Hussain offered this amusing homage to cricket groundstaff:-

"Brisbane: That cricketing epicentre of humidity, storms and bad decisions.

As Australia and Pakistan prepare to lock horns today, rarely has there been less certainty over what conditions this volatile arena will produce. Every consideration carries a counter-consideration: The decks are green, but the spinners do well. It's a pink ball, but Tests need to go for five days. Humidity produces prodigious swing, but Michael Slater scored 158 in 1994/95 as the TV reminds us every year. Really good innings, though.

In reality, we have no idea what will happen in Brisbane - and don't we hate it? This is because knowledge is power, and cricket-types crave power.

Enter the groundsman: The most important cricketing figure on the morning of any cricket fixture, anywhere.

Of course, in almost all cases, the groundsman is a twice-divorced, weather-beaten man in his mid-40s who lives next to your home ground in a one-bedroom cottage that was included as part of his employment package. No one knows what goes on in that little house of horrors - and frankly, no one wants to know. People thought Josef Fritzl was just a regular guy. That's all I'm saying.

But on the morning of a cricket match, the groundsman is the only one who knows what demons the pitch may or may not hold. For he knows every inch of this oval. This, right here, is his Sistine Chapel ceiling.

He's been up since the crack of dawn, circling around on his green three-wheel groundsman vehicle with faded "Triple M Rocks" bumper sticker on the back. He's wearing those dreadful imitation Oakley sunglasses that he stole from his kid's Easter Show showbag back in 1997.

He's had a minimum of three VB stubbies by the time you've turned up; the empty bottles placed carefully together next to the dressing room to make the most depressing art installation you've ever seen. He smells of Longbeach cigarettes, non-TGA-approved sunscreen, and regret. He's got a sock tan so deep it's illegal in all 50 US states.

His name might be Rick, or Alf, or "Two-Bit", or some other delightfully blue-collar nickname strictly reserved for ground-staff types - but who cares, really. You will never speak to him in front of anyone else because that would instantly diminish your already-dwindling social capital. After all, his sole purpose in life is to roll out decent wickets for you to hit runs on.

In reality, he's got a PhD in Horticulture - and you're still unemployed and living in your parents' basement at the age of 28, having dropped out of uni to pursue a career as a DJ.

Anyway, by simply bending down and pressing your palm against the surface, you can easily tell everything you need to know about how this game will play out. It doesn't matter if it's been raining all week and the pitch is only 13 yards in length due to a measuring error.

"Yeah, it'll do a bit early, but will flatten out by lunch."

"Hope you brought your eTags, boys, because this is an absolute road."

You will say these things because the most important facet of owning your convictions is to deal only in absolutes. If you've played even a modicum of grade cricket you'll have had a fair amount of practice at this. "These blokes are the worst blokes in the comp." "That's the biggest six I've ever seen." "Fattest umpire I've ever seen." "Worst dressing rooms in grade cricket." "Robbo's got an unbelievable rig," etc. There is no middle-ground or room for discussion in grade cricket. Grade cricket is inherently stuck in 1984, where balanced viewpoints, introspection and reason are treated the same way wicketkeepers in short sleeve shirts are - and rightly so, to be fair.

Conviction, it should be said, is everything. It's basic Roman philosophy. The Romans regarded philosophical education as distinctly Greek, and instead focused their efforts on building schools of law and rhetoric. It's important not to ask "why?" when your captain tells you that "we have to win today to keep our finals hopes alive" (they're not alive, they're dead like all of your hopes and dreams), it is only important to assert that things are so. You must win so this 43-year-old man who works in middle-management at some nondescript suburban business practice can avoid spending time with his wife and two kids on the weekend for just a couple weeks longer. That is his law; his rhetoric.

So he'll elect to bat first on the same wicket that you were bowled out for 73 on, because "it'll definitely rain in the afternoon". This is a man who bought $630,000 worth of Ansett Australia shares eight days before their collapse in 2001 because "they sponsor the cricket". He knows nothing, but his conviction is Stalin-esque.

The single most important philosophy in Rome was Stoicism, which, as you well know, originated in Hellenistic Greece. Stoicism, the endurance of pain or hardship without the display of feelings and without complaint, is possibly the most grade cricket thing ever. The school of Stoicism taught that virtue was based on knowledge. Your captain will vaguely point to a corner of the ground and say "the weather always comes from over there"; which, given that he doesn't remember the date of his children's birthday, says all you need to know about him.

He doesn't understand wind patterns, polar cycles, trade winds, or variable doldrums; and agrees that global warming is a myth created by the Chinese Government. He just "knows" that the clouds sometimes come from mid-wicket.

Which brings us back to the Gabba. As everyone proffers their view on what these unknown conditions hold, consider the Romans and consider the Stoics. Because for cricketers, they are our philosophical forefathers; they hold the key to our deep-lying doubt about pitch conditions. You obviously have no idea what's going to happen, so just trust the groundsman - but never admit that."

You can read the original article from Fox Sports HERE