0 Bristol marked by simplicity and service 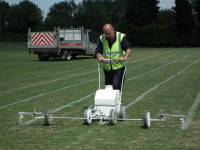 With 70 school grounds to maintain and just seven members of staff, you would expect Russell Loud, Area Team Leader for Bristol City North, to be stretched if not stressed. But that's simply not the case. Having worked for the council for over 20 years following 14 years with a private company contracted to maintain pitches for the navy and the RAF, the job is second nature.

"When it comes to marking out I've got all the measurements in my head," he says. "I blame my uncle who started me off in this business when I left school."

The workload is phenomenal, particularly when you consider that one school alone - St. Bede's - has a 400 metre running track, javelin, two discuss throwing areas and shot put, plus a soft ball pitch and the boundary to mark. "From Easter to September we're line marking mainly for athletics and from the autumn onwards we have 49 winter sports pitches to look after," he said.

Although the sites are quite close together and some of them are small, junior pitches, Russell and his team can't afford any hold-ups.

"Obviously with all the marking I've got I don't want something going wrong," he said. "If I've got a school sports day to prepare for, the job has to be finished on time."

Russell has used the Vitax Supaturf TXE line marking machine since it first came out around 15 years ago and has no intention of using anything else. "It's a brilliant machine. It's so simple that there's not a lot that can go wrong. Our markers get a hammering but they don't let us down" he said.. "Even if there's a problem, I can get the spares I need very quickly.

"You may have the most expensive marker in the world, but if you can't get spares you don't want the machine."

Vitax Supaturf provides next day delivery on spares throughout the UK, and the replacement parts are easy to install. "You order your pipe, cut it to length and it's a simple push fit," Russell maintains.

The TXE offers another big advantage to Russell and his team. It is one of very few line markers that can apply three lines to produce two running lanes at the same time. "It's a simple matter of fitting the athletics attachment, which is easy to connect and disconnect, and you can do a whole track in one go," he says. "It saves a lot of time and effort."

When it comes to line marking paint, Russell and his team now use Supaturf's SupaStadia Eco. "Because it's concentrated we mix it up and it works out cheaper," he explains. "With budget cuts, that's a big benefit."