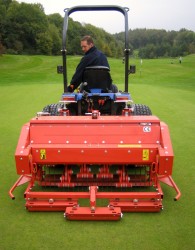 Course manager, Jim Braithwaite has just welcomed a new Terra Spike GXi6 to Long Ashton GC, at Clarken Coombe on the city's outskirts. The club has earned a first class reputation for its consistently high standard of greens and fairways and pro-active approach to preparation and maintenance.

In October 2003, the club purchased a Wiedenmann XP 160 specifically to deep tine the course. Six months later, in May 2004, Long Ashton Golf Club was the first purchaser anywhere in the UK of Wiedenmann's Terra Spike XF, the ultra-fast aerator which revolutionised the speed of deep tine aeration.

"We have had no problems at all with either our XP, or our XF. We've used them to systematically cover the course quickly and efficiently; the XP using its deeper tines on the fairways and the soil-based greens and the XF has been used everywhere," says Jim Braithwaite.

Noticeably in the last year heavier and prolonged rainfall has affected some of Long Ashton's clay-based greens; two of which - the 8th and 15th - have just had new drainage installed this month.

"With much wetter greens we started to reconsider our activities. A few of the top greens have access issues and backing up a large tractor was increasingly problematic on rain soaked turf. We started to think about the Terra Spike GXi6 which could be mounted to a lighter tractor and the fact that the aerator itself was much more compact," continues Jim Braithwaite

After discussions with groundscare sales specialist, Stuart Fry, from dealer TH White at Knockdown, a deal was struck to part exchange the five year old XF for a GXi6. Jim Braithwaite and his team could have opted for the brand new Terra Spike GXi8 which has just arrived in the UK with a working width of 1.8m, but they decided on balance the 1.4m machine was for them.

"The Wiedenmann GXi8 was tempting. We could see the advantage in productivity of the extra 40 cm and we had been used to the wider XF machine. However, what impressed up was that the GXi6 aerator itself isn't heavy - its weight is just 600 kg - so we knew combined with the lighter tractor it would suit our situation perfectly. It readily resolved our access problems and hardly leaves any sort of footprint when we back up.

"Now we've had the new GXi6 for a little while, it's proving exceptionally versatile, particularly in the wettest conditions. We've got into a system where we aerate nine greens one week and then nine the following week. Once the aerator has been over the ground another member of the team follows up with a cut to 'true' the surface. This is the first Wiedenmann Terra Spike where we've had the three-part roller that rolls the ground after tining.

"Even with the XF, very few of the members would realise the turf had been aerated and now we're using the GXi6 with its own roller, it is even less obvious - there is very little impact or disturbance to the players or to ball roll. The roller is a good addition and we didn't know that only Wiedenmann produce an aerator that offers a three-part roller, " continues Jim Braithwaite.

"As part of our autumn/ winter schedule already we've had the GXi6 around the whole course using 8mm tines down to a depth of about 6"-7", improving gaseous exchange by replenishing the atmosphere and expelling stale air. We'll continue to do this once a month all year round, then throughout the year we'll follow this up with a combination of slitting and sorrel rolling."

As well as the Terra Spike GXi6 and the XP, the team at Long Ashton also has a Wiedenmann Whisper Twister blower and a Super Pro rotary cutting deck.

"Wiedenmann products suit our needs; if we didn't like them then we wouldn't come back. As well as top rate after care they are forward thinking company, looking ahead and always listening to customers," concludes Jim Braithwaite.

Stuart Fry, who has been with dealers, TH White at Knockdown branch for the last 18 months, agreed that he too liked working with Wiedenmann UK:

"They are one of the best manufacturers for giving support at demos, constantly on hand to answer the awkward questions, especially when someone puts you on the spot. But they are in a league of their own when it comes to machinery installations - always in attendance, and can be relied upon to help set the new machine up specifically to derive maximum benefit and productivity for the client with regard to the job in hand." he said.