by External source
in Industry News
on 04 Nov 2012 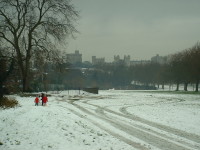 Snow fell in the South and the West Country overnight, including in Somerset, Dorset, Wiltshire and Devon A predicted 10 hours' of rain in parts of the South-East and East Anglia has led to flood warnings Tomorrow will be the coldest Bonfire Night since daily records began 14 years ago People have flocked to bet on a white Christmas; Ladbrokes have already slashed the odds

Millions woke up to a stunning white Sunday morning as the first major snow fall of the winter hit the south of England last night.

While snow fell across the South and West Country, heavy rain in the South-East and East Anglia has sparked flood warnings while experts announced tomorrow will be the coldest Bonfire Night in 14 years.

Two inches of snow is predicted to fall today in Bath, Somerset. The Met Office reported 'heavy snow' in places as up to an inch of snow settled by morning on higher ground in Somerset, Dorset, Wiltshire and Devon.

See a range of snow clearance products in the pitchcare shop

See the rest of the article on the following link:- Mail On Sunday