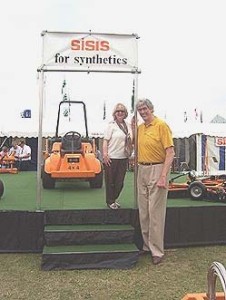 Britain's former tallest man, who was 7ft 6in, is laid to rest after dying at 71

Pitchcare have fond memories of Christopher who, back in 2003 was hired to help promote our Pitchcare Website at the Windsor 2003 Saltex show. Christopher made a point of visiting each of Pitchcare's supporting exhibitors.

He grew to 7ft 6ins and had to have an operation to stop him growing.

60 people attended his funeral this week.

A bespoke coffin, measuring almost 8ft long, was made especially for him.

Friends said the former record holder and basketball player was a 'gentle giant'.

Read the rest of the article on the following link :- http://www.dailymail.co.uk/news/article-2986537/Former-Britain-s-tallest-man-grew-7ft-6in-buried-huge-bespoke-coffin-funeral-attended-members-Tall-Club-Great-Britain.html#ixzz3UAbU9h6n