Having already built his own house single-handedly, The WWII veteran he is taking his non-stop DIY exploits to a new level by landscaping his back garden in Frankley, Birmingham and bought a JCB 8008 micro excavator to carry out the work

Grandfather-of-two George, who was injured twice during his war service, said: "Hard work and staying active is the secret of my good health. The JCB machine is my Godsend. With its help I aim to be still working on the garden at the age of 100."

JCB's UK and Ireland Sales Director Yvette Henshall-Bell said: "George is without doubt JCB's oldest customer and the oldest driver of a JCB excavator in the UK. We are delighted he has once again invested in a brand new JCB machine and look forward to him placing a further order in the future."

It's the Birmingham-born dynamo's second JCB digger from JCB dealer Gunn JCB - his first, which he acquired three years ago, was an ex-demonstration machine which he used to clear out premises he also owns a few doors away.

Apprenticed as a joiner, George worked for Harris & Sheldon Group before he and his wife Ethel, now a sprightly 91, moved to Frankley to run their shop in 1958. Shortly before his retirement George bought adjacent land from the council for £4,000 and, following a lengthy planning process, started out on a three-year project to build his own house. The couple now live on the first floor of the two-bedroom property while renting out the ground floor to a floristry business. 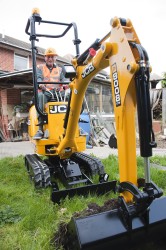 "I built the house from scratch completely on my own," said George. "I never had a labourer and managed without scaffolding. I put the plumbing in, and the central heating, and I did the plastering."

Afterwards he built up the back garden of the house by six feet by using soil and rubble which became surplus from the works site next door. Now George, who even welded his own garden gates, plans to excavate the garden area fully before putting in a lawn and paving.

"I've taken delivery of the new JCB digger using my old one as part-exchange," he said. "I've got all sorts of bricks and boulders which I need to move, and these days I need a bit of help with the lifting. Landscaping the garden is the latest example of the way I like to do things myself. I don't smoke and I only drink the occasional glass of lager on special occasions - it's the outdoor life that I love."

Dawn Wren, aged 67, who helps out in the florist's shop, said: "George is a fantastic example to us all of the way working hard keeps us fit. He never stops, he's amazing. He takes a short break in the afternoon and then he starts work again through the evening."

Gunn JCB Sales Engineer Glyn Male, who sold the digger to the George and is providing after-sales support, said: "I hope I have the same energy as George has when I look at retiring. The JCB Micro 8008 will be invaluable to him for moving earth and paving during his landscaping project."