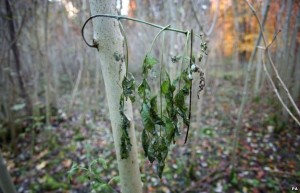 A year after the first case of ash dieback in wild trees in Britain, the disease has now spread across much of England, Wales and Scotland.

The public is being asked to be the "eyes and ears" of the countryside amid concern about new global threats that could spell disaster for forests.

The oak processionary moth first detected in Ealing and Richmond in 2006, then outbreaks in south London, west London and Berkshire - it defoliates and weakens trees, making them susceptible to pests and diseases.

Asian longhorn beetle: wood-boring insect that can cause damage to a range of trees - a major 2012 outbreak in Kent was traced to wood packaging imported from the Far East.

Citrus longhorn beetle: a few have arrived on trees imported from China, Japan and South Korea, but have so far been intercepted Chalara dieback of ash: fungal disease of ash trees, now established in the UK, which causes crown death and wilting and dieback of branches.

Pine processionary moth: insect moving north through France and now breeding near Paris - 1995 outbreak in Scotland was contained Emerald Ash borer: beetle that damages ash trees - a native of Asia, it's arrived in the US in imported wooden packing material

In a London park, forester Simon Levey is checking a moth trap strung high in the canopy of an oak tree.

He is searching for signs of the oak processionary moth, which is present in parts of the capital and Berkshire.

When the moth's caterpillars emerge from their nests, they can strip oak trees bare and harm human health.

"What we're looking for in these oak trees we see around us is their nests," says Mr Levey.

"They're like a grey wart on the side of a tree that can range from the size of a golf ball, if not smaller, to things that are almost a couple of foot in size."

It is the moth's caterpillars - with their thousands of tiny hairs - that are the hazard. Touching the caterpillars or their nests can cause skin rashes or, in extreme cases, sore throats, breathing difficulties and eye problems.

In Croydon, inspections are being carried out for the moth around a 2km zone as part of a rigorous programme of control and monitoring. Infected areas are sprayed with a bacteriological agent to destroy nests and caterpillars.

The traps - which contain a sex hormone that attracts male moths - are set outside from July to September, when adult moths are in flight, to see how far they have spread.

"We've actually created a ring of traps for these moths round the infected area just to see if the moths are flying beyond where we would expect them to be," says Mr Levey.

Dr Nigel Straw from the Centre for Forestry and Climate Change at the Forestry Commission says monitoring is key to organising a control programme - including surveys from the ground and pheromone trapping.
Caterpillars Oak processionary moth caterpillars

Any moths captured are sent to the Forestry Commission's research station in Hampshire for analysis.