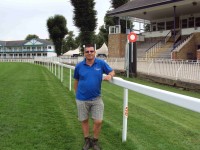 There are few racing certainties, but a quality grass seed which provides a greener, thicker, better looking surface is a better bet to maintain a top racecourse than cheaper alternatives - just ask a man who knows.

Jeff Green, Clerk of the Course and Grounds Manager at the Royal Windsor Racecourse in Berkshire, believes investing in the A20 Premier Ryesport from British Seed Houses is money well spent. "I came across it by chance and it certainly proved its worth. I have tried other cheaper options but I keep coming back to it because it delivers what I need. In fact you could say I have done my own seed trials and have based my decisions on the results," he said.

Delivering consistently high standards is important at a course which hosts 26 race meetings a year from April to October, and September's annual trade show IOG SALTEX. It takes a battering from thousands of visitors as well as the thundering hooves racing for the finishing post.

Repairing the running surface after race days is important not just for the horses' benefit but also so it looks good for spectators. Jeff uses A20 Premier Ryesport across the whole of the running surface which covers eight-and-a-half hectares, using it for repairs and for overseeding.

He said: "When I came here in 2009 the course was using several suppliers and many sorts of grass seed mixes. When BSH rep Sandy Pentecost dropped off a bag of A20 to try I gave it a go. The difference it made was clear; the repairs were much improved so I went and ordered more.

"A week after a race meeting the worn patches have a green tinge already and two weeks later the patches are completely healed over. The seed provides quick repairs which look good and produce a better finished surface. It germinates more quickly and with shoot density greater but finer than other mixes I have used in the past.

"It is great for winter colour and coming through out of the spring. Based on my experience perhaps other racecourses should give it a trial. I know it costs more but I am probably using less seed than I was before and I know I can rely on the results."

Repair work will be required following SALTEX as the crossing areas are covered with a steel mat for the show but Jeff is confident A20 will get it back to its best.

And with restoration work required on the site following the London 2012 Olympics, he has also recommended British Seed Houses' parkland mix for the re-seeding.

Sandy Pentecost of British Seed Houses said: "We are delighted that Jeff has seen for himself the difference it makes in choosing a premier grass seed which delivers a consistently high quality. It can be a false economy using cheaper mixes and many of our customers share Jeff's view. The A20 is a four way ryegrass mixture which is noted for its hard wearing, disease resistance and good winter recovery qualities."