The first is a self-contained hydraulic power pack for the towed version of the machine, enabling the ProPass 180 to be used successfully behind work vehicles or tractors with no auxiliary hydraulic system or with an external oil flow of less than 23 litres/min (5gpm). 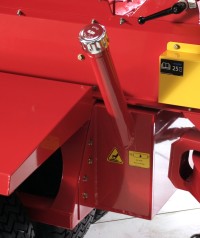 The second new option now available from Turfmech enables the towed version of the ProPass 180 to be used successfully and safely behind Ransomes Jacobsen's Cushman Turf-Truckster work vehicle.

It achieves this by means of an innovative mounting system known as the TYCROP Direct Connect (TDC) chassis which links a purpose-designed drawbar and hitch fitted to the ProPass 180 to a special hitch-receiver assembly bolted to the load bed of the Turf-Truckster, just ahead of the rear axle.

The resulting connection between the trailed ProPass 180 and the Turf-Truckster maintains excellent weight distribution due to the position of the hitch and the fact that the weight of the top dresser and its contents is carried by eight tyres - four on the Cushman Turf-Truckster and four on the ProPass 180. The risk of compaction is further reduced by the ProPass 180's four-wheel walking beam suspension, which keeps all four wheels firmly on the ground over undulating or uneven terrain.

The connection produced between the ProPass 180 and Turf-Truckster by the TDC chassis helps maintain exceptional manoeuvrability, structural integrity and stability under normal use. However, should the top dresser ever get into a situation where it is at risk of toppling over, a special "crumple zone" will allow the hitch to collapse, absorbing the turn-over energy to keep the Turf-Truckster upright.

Dual jack stands are supplied with the TDC chassis for fast, easy connection of the ProPass 180 to the Turf-Truckster and its subsequent removal after work. The stands are stored securely and conveniently at the rear of the machine during top dressing operations.

Tycrop Hyd Power Pack 2: The oil reservoir for the optional hydraulic power pack is attached to the chassis at the rear of the machine.