by Laurence Gale MSc
in Football, Rugby, and Public Places
on 14 Jun 2013

0 Broadoaks get stitched up! 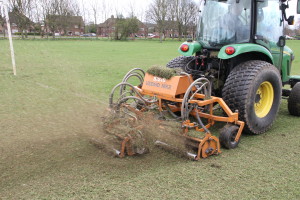 It's always nice to be involved in projects which enhance and promote the benefits of sports participation, especially concerning public open spaces. So, when I was contacted by one of my former council colleagues, Derek Owen from Telford & Wrekin Council, wanting to look at ways of improving some playing pitches at Broadoaks Playing Fields in Telford, I offered to go and take a look.

Following an assessment, which identified the need to carry out a robust end of season renovation to treat the weeds, decompact the pitches, restore levels and overseed the area, the council agreed for this work to be undertaken, along with trialing permanent pitch lines on one of the pitches.

The pitches in question are well used by several clubs and, therefore, take quite a battering every year. In addition, due to council budget restrictions in recent years, the pitches were only being cut on a ten day cycle and overmarked weekly, with some minimal localised renovations at the end of the playing season.

On the recommendations of ALS Contracts, and based on the available budget, a programme of work was initiated to apply a selective weedkiller to control broadleaf weeds, spray soluble iron to burn out the moss, allowing two weeks before scarifying the pitches in two directions.

80 tonnes of Bathgate moist 60 grades sports sand was applied; 60 tonnes for pitch 2 and the remainder to restore levels on pitches 1 and 3. 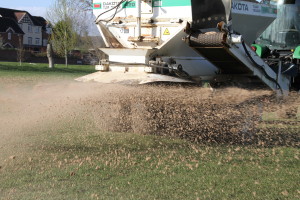 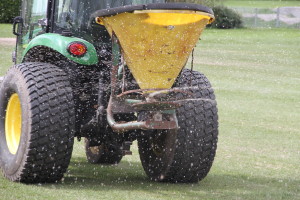 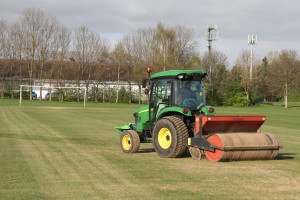 The pitches were then aerated using a Wiedenmann XD solid tine spiker to a full depth of 250mm, where the ground allowed, using 19mm tines on 125mm centres spacings.

Twenty five bags of Action Replay were disc seeded in three directions at a sowing rate of 35-50g/m². This perennial ryegrass mix consists of 40% Essence, 40% Doremi and 20% Ponderosa, and is ideal for cutting as low as 20mm. All materials were dragmatted and brushed in.

A pre-seed fertiliser was applied to help establish the new seed, followed by a second application of a slow release spring and summer fertiliser to stimulate growth during the growing season; a third application in the autumn will be given to help maintain colour and some vigour going into the football season.

The purpose of these fertilisers is to promote growth and to enable the sward to establish. However, this will only occur if there is a decent mowing regime in place to keep the sward between 30-40mm, and cut on a regular basis, ideally once/twice a week to help establish a decent sward.

The grass will be cut by the council's contractor, Telford & Wrekin Services.

Whilst on site, it was noted that the pitch lines were of poor quality. They had been continually overmarked in the same position over many years, they had sunk and were difficult to maintain a decent bright line due to the lack of grass cover.

In recent years, there has been some research and development into permanent line marking systems for sports pitches, one of these being Pitchline 3G, which is being used by a number of local authorities in the UK and Ireland.

It was suggested to the council that they install a set of artificial lines to see how they perform and what savings could be made.

The work was undertaken by Sweepfast. The process utilises specially formulated UV treated white polythene film. The fabric is pre-shredded into supple and flexible fibres. Using a specialist machine, the polythene cloth is folded and inserted 65mm into the ground. The w idth of the finished line can be adjusted to between 90mm and 120mm wide. The lower portion of the fabric lodges itself in the root structure of the grass, whilst the upper part sits above the soil level, but bends slightly to stand below the mowing height of a normal grass cutting regime.

In Ireland, the product has become very popular, with a number of football clubs using the system for five years.

Work on the pitches began as soon as the last match had been played, week commencing Wednesday 1st May 2013.

Three members of the ALS contracts team arrived on site and began the renovation programme, completing all of the work in just three days. It was then left to Sweepfast to come in and install the 3G pitch lines. This work was scheduled a few weeks after the completion of the renovation work to allow the seed to germinate.

The machine is laser guided to ensure the lines are installed straight and, once installed, they only need a light rolling with the wheels of the tractor to firm them in. It will be interesting to see how the lines cope with the rigours of the forthcoming football season.

A recent inspection of the pitches saw a great response from the work done, with plenty of new grass cover and the grass vigorously responding to the feeding programme. It will also be good to compare the pitches later on during the playing season, especially in terms of how well the players respond to the new artificial pitch lines.

For a full range of renovation products ( topdressings, selective weedkillers and seed) including line marking products go online to the Pitchcare shop