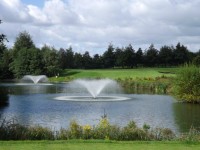 But the two new Sunburst fountains are as functional as they are beautiful, having also resolved a blue-green algae infestation. The algae posed not only an aesthetic problem, but also a practical one for the club's co-owner Phil Morris because the lake is used to irrigate the greens.

"The algae virtually covered the surface of the lake and we noticed our greens were just starting to deteriorate, which was verified by water tests," he reveals. "In an attempt to stem the problem we initially tried dispersing the algae with sprinklers and applied barley straw, but that didn't make a difference. Our irrigation consultant recommended aeration. The units have been running for eight weeks now and there's certainly been a reduction in the algae. But even within a couple of weeks there was an improvement, and by the end of August we'd completely turned it around."

Suitable for lakes up to 15-feet deep, the spray from the Sunburst units breaks up algae mats by mixing both surface and bottom waters. An added bonus, however, is the compliments about the fountains' stunning seven-foot spray height and attractive pattern. "Everyone here is very positive about how the fountains look," Phil says. "The members are full of praise - they think they're fantastic. The lake is on our 16th hole and they're now saying it's our new signature hole, they look that good!"

Phil was also delighted with the service he received from Otterbine's Reg Varney and Roger Lupton from distributor Lely UK. "When you're investing in a product like this you need guidance and we didn't get that from the other fountain company we initially considered. Reg and Roger came to our first meeting with recommendations tailored to our lake, and the information on horsepower, running costs and the like was just what we wanted. They appreciated it was a big decision for us to invest in two units, even taking us to The Belfry to see their fountains - that nailed it for us.

"Overall we got a wonderful service, and Roger and Reg have done everything they can to ensure we're happy with the units. We're really pleased."

For more information on Otterbine's range of aerating fountains and how they can help improve water quality, contact distributor Lely UK on 01480 226848 or email otterbine.uk@lely.com to request a free leaflet on the benefits of aeration, 'It's Never Too Late To Aerate'. Alternatively, visit www.otterbine.com.