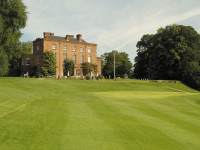 Standing on the 1st green at Edgbaston Golf Club at 8.30am in early August with Head Greenkeeper Mike Hughes, I find it almost impossible to believe that we are literally minutes away (two miles) by car from Birmingham City centre. Set in 59 hectares of magnificent mature parkland with beautiful woodland and highlighted by the most wonderful picturesque lake, Edgbaston golf club has everything the appreciative golfer could possibly wish for.

The club has been established since 1896, though not at this particular site. Originating at nearby Warley as a 9 hole venture, the club moved to Harborne in 1910, then to its current 18 hole location in 1936. Superbly designed by H.S. Colt and carefully laid out, amongst the parkland estate of Edgbaston Park, with its stunning 18th century Georgian mansion, this is a course that has stood the test of time well. Still ranked in the top 10% of UK golf courses and with an enviable 70-75% of repeat business from visiting societies, Edgbaston is ample testimonial to the hard work of Mike Hughes and his dedicated staff of five greenkeepers.

Designer Harry Shapland Colt was a pioneer golf course architect of consummate and practiced skill by the time he took on the task of transforming the original grazing leys of the park into a professional and well crafted golf course. Edgbaston is a tight par 69 with undulating greens, which will certainly test the unwary visitor and inattentive putts. An enjoyable, though sometimes demanding, course to play, this is golf as it should be.

"Golf seems to me an arduous way to go for a walk, I prefer to take the dogs out" HRH The Princess Royal 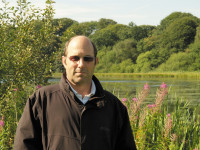 Mike Hughes joined Edgbaston as Head Greenkeeper in 1987, having started as a "young shaver" at Drayton Manor Golf Club before moving to Walmley and then taking up a position as Head Greenkeeper at Sandwell Park in 1979. Mike is a well known and highly skilled player himself with a well earned handicap of 1 and has qualified for National tournaments every year since 1977. He still plays around forty competitive rounds a year as well as weekly rounds at his local club.

With about 800 members plus visitors, and approximately 37 hectares out of a total of 59 hectares of grass maintained and in play, Mike and the greens staff are kept very busy indeed.

The greens are constructed out of indigenous natural soil, sand in the northern end of the course and clay in the southern end, and are of the 'push up' type. Consisting of approximately 80% Poa annua grass species, they average around 400 square metres in size with a total greens area of one hectare including practice and putting greens. The greens are maintained at approx 3.5mm - 4mm summer cutting height and are cut every day from May through October. 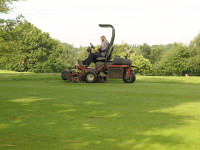 All the greens and tees have irrigation, although this year it has been superfluous to requirements since May with 151 mm of rain falling in July alone as opposed to the normal annual 50mm! Mike says "the biggest problem facing us at the moment is 25-30mm of thatch on the greens, resulting from pressures of continuous play restricting the intensive aeration programme we always had in the past."

To combat this problem, he has cut back on inputs such as fertiliser and wetting agents as much as possible to encourage microbial activity, and also introduced sand banding via a newly purchased Graden Contour Sand Injector. Arriving in October 2006, the Graden was put to work immediately and all 18 greens were injected with sand at 40mm depth and 30mm spacings during the winter.

The main drawback was the sheer volume of sand needed, with around 3 tonnes per 400 square metres required to complete the job. This translates into approximately 55 tonnes of kiln dried sand per year for each application. Mike is hoping to do two treatments a year, together with top dressing in conjunction with solid tining in the spring and hollow tining in the autumn. Mike uses a 70/30 top-dressing mixture and applies approx 120 tonnes a year in total.

Aeration on the greens is restricted at present to slitting every four weeks throughout the winter period and Verti-Draining twice a year in autumn and spring. Overseeding with 100% Browntop Bent takes place whenever conditions allow, although with 5% establishment on average from a 20kg bag sowing into existing sward, Mike seriously questions the value of the operation.

Fertiliser applications to the greens have been maintained at 100 kg/ha of nitrogen, usually 8.0.0. slow release. Mike intends to reduce this to 70 kg/ha in three applications plus iron and the occasional liquid feed. He firmly believes in only feeding the greens when they need it in his quest to reduce thatch as much as possible. 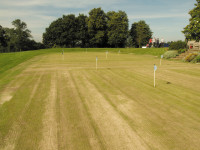 Surprisingly, disease is restricted to annual bouts of Fusarium and usually requires two applications of fungicide.

The tees are maintained at approximately 12mm cutting height and cut 2-3 times a week. They are sown with dwarf rye grass and over-seeded and topdressed twice a year together with Verti-Draining. Fertiliser is usually two applications of a slow release formulation.

Fairways consist of indigenous fescue/bent grass species and are mown at 12mm three times a week. No fertiliser is applied and weed control is usually restricted to every other year, and only then if necessary.

The club intends to invest in a new irrigation system for all greens and tees to replace the current antiquated one. Work will commence on the first phase in September this year and will be in use by March 2008. The cost is estimated at £90,000 for the initial programme, with the final figure likely to be £180,000 when the full system is commissioned in 2009-10.

Mike is a keen conservationist and accordingly restricts the use of pesticides to a bare minimum in order to preserve the wild flora and fauna in every possible way. The substantial and very beautiful lake at Edgbaston Golf Club is a picture of tranquility and supports several pairs of heron, and other wild birds which were clearly visible during my visit. 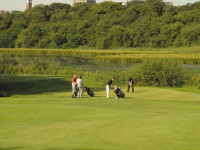 The course has suffered dramatically from the extreme weather conditions prevailing this year and in 2006. Only two weeks prior to my visit, several fairways were under water and this resulted in much lost revenue. I can only hope that August and September will be kinder to this wonderful example of parkland course design at its absolute best.

Approximately 90% of the machinery used by the club is of Toro manufacture, including all the greens, fairway and rough mowers and two Workman utility machines. In addition the club owns a 2.1 metre Verti-Drain, Graden Contour Sand Injector and a John Deere aerator. The three tractors in use are New Holland and John Deere. A Cushman and a Trilo sweeper complete the machinery picture.

Many thanks to Mike Hughes and the management team of Edgbaston Golf Course for their warm welcome during my visit.

"Personally I have spent half my life hanging about at golf courses talking to Greenkeepers, the rest of the time I've wasted" John Reynolds