0 Bruntsfield Links looking after its investment with Toro

A £1.2 million investment in the 18-hole course at one of the world's oldest golf clubs, Bruntsfield Links Golfing Society in Edinburgh, has concluded with the arrival of a brand new Toro fleet of machinery to safeguard the investment. 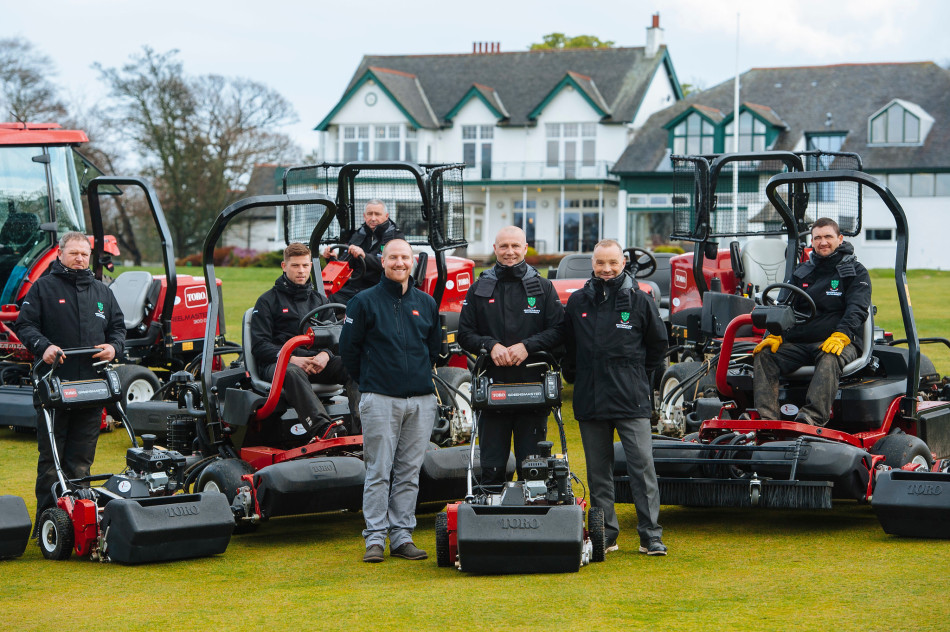 Neil Hogg, course manager at Bruntsfield Links, is pictured centre, with the club's CEO Dougie Cleeton on the right and Reesink's Stuart Tait.

As course manager Neil Hogg says, you don't create something of this quality if you don't have the machinery to keep it at its best: "This is our first package deal and the timing coincides with the conclusion of the extensive revamp of the course by golf course architects Mackenzie and Ebert. The course has been designed around a very modern spec and reflects the way golf is played in the 21st Century. We knew we needed a package deal to take care of the course and deliver the results it deserves."

The main objective of the redesign was to keep the original Dr Mackenzie shapes and feel but bring it up-to-date. Mackenzie and Ebert follow in the footprints of past course work completed by Willie Park Jnr, Dr Alister Mackenzie, James Braid and Fred Hawtree.

"Despite being an Open qualifying venue since 2011, there hadn't been any changes to the course since the early 1970s," Neil says.

There are now eight new holes and more than 80 bunkers which have been redesigned and repositioned to reflect the distances club golfers are now striking the ball, plus the course has been restored to a par 71 to create longer play. The 12th & 13th holes were combined to create a challenging dog leg par five into a prevailing wind and a new signature par three hole at the 16th over a pond has been introduced.

And already Neil notes the improvements are making a big difference for the club: "The course improvements were designed to elevate Bruntsfield to be one of the top parkland courses in Scotland. The works have only recently finished, but have made such a difference and been so well received, we've surged up the Top 100 Golf Courses list by 69 places. Plus, we've seen an increase in membership too and now have an extensive waiting list in place."

However, the equipment in the shed wasn't quite so shiny and new, as Neil explains: "The shed was previously a mixed bag of machines. Some were getting on for 30 years old and the machinery that made up the fleet as a whole hadn't really been considered. With Dougie, our CEO's guidance, plus that of Reesink's Stuart Tait and David Raitt, we looked at how we could streamline things and ensure the best for the future of the course."

Dougie Cleeton enjoyed a successful tenure as managing secretary of Blairgowrie Golf Club before joining Bruntsfield and bringing with him sound knowledge of what to expect with the redesign of a course, says Neil: "We were lucky to get Dougie, he'd been involved in similar projects before and brought with him a wealth of experience. Together we went through the machines in the shed and planned the new fleet."

"The new fleet is delivering on our expectations. All the staff love using the machines, the fairway mowers are so nimble and light, and the pedestrian mowers in particular are a big hit. Plus, maintenance and servicing are a lot easier."

Neil finishes by saying: "It's the perfect end to a successful project. We started out with quality and longevity in mind and we conclude with it too. The machines will respect the course and bring out its best for years to come."