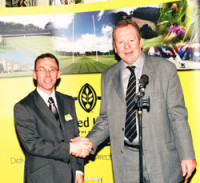 The UK turfgrass industry should be proud of the progress it has made in improving the quality of grass sports pitches in the modern era.

Speaking at a lunchtime reception in Harrogate during BTME week organised by British Seed Houses, ex-England rugby captain and British Lion Bill Beaumont gave a players perspective on natural turf. "As a player, there's nothing like playing on a superb, grassed pitch in a magnificent stadium. And there's no doubt that in delivering such good natural surfaces, the turfgrass industry has made a significant contribution to the development of sport in this country. Grass pitches are far better now than they were in my day in the 1970s and 80s," he said. "The grass surface is also very much an integral part of many of our national team games. Take cricket, for example. Test cricket simply wouldn't be the same if the vagaries of the pitch weren't an important element of the match," he pointed out.

The British Seed Houses reception drew an audience of around 150 from all sectors of the turfgrass industry. Summer and winter sports pitch

groundsmen, greenkeepers, agronomists and architects with a keen interest in the future of natural grass were all well represented.

British Seed Houses general manager Simon Taylor thanked everyone for attending and stressed that it was important for the industry to work together to counter the threat from the artificial pitch lobby: "There's nothing better than natural turf," he said. "We all know it and the players prefer it. But we must speak with one voice if natural turf is to remain the first choice surface for football, rugby and cricket in this country," he said.

The British Association of Golf Course Constructors (BAGCC) celebrated its 25th Anniversary at BTME by raising £2755 for the British Red Cross Tsunami Appeal.

sporting memorabilia. There was even the chance to see BAGCC chairman David White have his beard shaved off for a donation to the Appeal.

Prizes were put up by individuals and organisations from across the turfgrass industry, particularly pitchcare.com, but also included a signed

Manchester United shirt donated by Phil Breaky of Irrigation Control's young son, who was keen to give the shirt up for such a good cause. It raised £600 on the night.

The generosity of Bob Buckingham from Toro was also particularly noted. He successfully bid for a Geoff Hurst picture, then put it straight back into the auction.