The Harrogate show lived up to its reputation of being Europe's premier golf exhibition. Final attendance figures have not yet been received but, after day 2, numbers were already up on the previous year's corresponding period.

Pitchcare ran the show's first ever internet café. The usage profile was very interesting with exhibitors, particularly American, making use of the service at the beginning of the day, then a 50:50 mix of visitors and exhibitors during the day, with more exhibitors towards the close. The service was well used and appeared to be enjoyed and appreciated by all concerned. 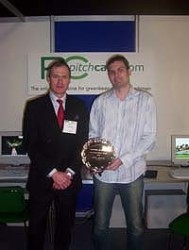 Tim Fell of Tillers Turf, the Award sponsor, kindly agreed to make the presentation to Colin of an engraved silver salver and a cheque for £2,000.

A point was made of thanking the judges - Stella Rixon (RTRI), Martin Jones (NTF), Simon Jacob (Scotts), John Hacker (PSD) and Alex Vickers (Cranfield). They had the difficult job of deciding the overall winner from a host of excellent responses to the monthly topical issue question.

The best monthly answer to each of the topical issue questions can be viewed in the Technical Merit Award section. Click on the link on the Home Page.

Another Pitchcare supported event was the Unsung Hero Award, initiated by Terrain Aeration. In the Greenkeeping category the award went to Brian Payne, Head Greenkeeper of Burnham Beeches golf club and, in Groundsmanship, the award went to Tim Parker of Woolpit cricket Club. Presentations were made to the winners by Chris Biddle of Turf Professional and John Richards of Pitchcare.

Fuller details of the awards and other events at BTME will appear on the Pitchcare site at the beginning of next week.