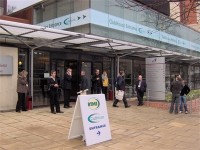 Again, BTME has proved its popularity. Not even severe gales and snow could put off visitors from attending the European golf industry's leading exhibition. Well over 200 companies and organisations took stands in the impressive Internation Exhibition Centre, attracting over 6,800 visitors.

Each year we continue to see established companies launch new products at the show, together with the added attraction of welcoming newcomers into the industry.

Both exhibitors and visitors alike enjoy BTME. Holding the show in January, a quiet time for most greenkeepers and groundstsaff, offers them the opportunity to stay for a few days, making the most of their time from a business and social point of view. Many a deal is struck in one or other of the convenient bars and restaurants that cater for conference personnel. 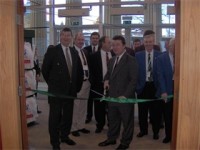 Exhibitors were spread out across 5 halls, providing good access to all the stands and attractions. The atmosphere was very good, many of the visitors I spoke to were pleased with the layout and the range of products and information available.

The BAGCC auction, held on Wednesday evening, raised over £5,000. The money was raised from the auctioning off a number of donated items including a Paul Gacoigne signed photo, a signed Geoff Hurst lithograph and a Man United signed shirt. However, the major fundraiser was a beard, owned by David White, the Secretary of the BAGCC. David had been cultivating his beard for 35 years but agreed to shave it off, at the right price. It raised a remarkable £2,500.

British Seed Houses hosted a lunch with Billy Beaumont the former England Rugby Union Captain, who spoke in support of natural turf and entertained the invited guests with some anecdotes about his former playing days.

As one would expect, a number of companies launched new products and services at the show. These included Echo, the power tool company, who have recently completed a new 20,000 square foot distribution and sales service centre in Thame to service their product expansion programme. Tower Chemicals (with a very impressive and well planned stand) attracted a lot of interest in the latest additions to their range, Aquifer (a soil surfacant) and Oars (for removing organic acids that cause water repellency). Floratine launched a revolutionary new range of liquid foliar feed products, specifically designed to improve nutrient up-take in cooler temperatures. SISIS announced their new distributorship in England and Wales of Shibaura Greens Mowers. Andrew Lofting from AJ Leisure.com was attending his first show with his new company, promoting a range of artificial products, namely tee mats and pathway surfacing materials. More details of all the major attractions and additions at the show are in the Industry New section on the Pitchcare site. 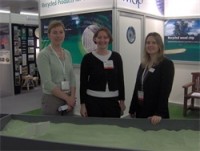 The demand for education in the sports turf industry is increasing all the time. This was reflected in the number of colleges and universities present at the show. As ever, David Golding and his GTC team were on hand to advise on courses and training opportunities.

In my capacity as Editor for Pitchcare, I was pleased with the reception I received when walking around the stands talking to both exibitors and visitors. More and more people are aware of what Pitchcare is about and what it can offer. The Pitchcare newspaper produced specially for BTME was very well received, and the Internet Cafe was always very busy.

Kerran Daly MG was elected Chairman of BIGGA for the forthcoming year at the Association's AGM. Course Manager at the prestigious 36 hole Gog Magog Golf Club near Cambridge, Kerran has conducted his entire greenkeeping career south of the border although he is actually a Scot, born in Fife into a coal mining family. He achieved Master Greenkeeper status during his time at Salisbury & South Wilts GC as well as gaining a teaching qualification, which he took at night school as he was also a part-time lecturer at Sparsholt College.

A number of award winners were announced. Minchinhampton Golf Club took the overall title of 2004 BIGGA Golf Environment Competition Winner from an impressive shortlist of 10. The club received a prize of £2,000 and a Scott's Weather Master Station. Full details of the competition and the achievements of all the shortlisted clubs appear on the Pitchcare site.

Pitchcare is a co-sponsor of Terrain Aeration's Unsung Heroes Awards, and this year's winners were Karl Fulford and Mike Symons who were recipients of the Groundsman and Greenkeeper awards respectively.

All in all BTME at Harrogate seems to be a show enjoyed by exhibitors and visitors alike. It certainly provides plenty of variety, there is a good choice of accommodation nearby, it is well attended and the social scene is second to none.