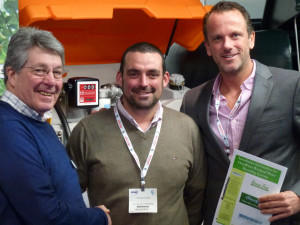 Director David Mears told us: "This was an important show for Highspeed Group Ltd and we were determined to make BTME 2014 our best yet!" The company was not to be disappointed as the footfall, orders and enquiries exceeded anything seen in the last four years!

"Confidence is certainly returning!" added David. Worthy of particular mention was the first ClearWater sale confirmed at the show from a German Golf Club.

Chris Knowles, course manager of Golf Club Hanau-Wilhelmsbad near Frankfurt visited BTME again this year and placed an order with Highspeed Group Ltd on their stand.

He'd met David Mears at BTME in 2012 and, having checked out a number of 'washpad solutions', believed the ClearWater recycling system to be the ideal solution to meet the demands of anti-pollution legislation and be future-proof.

"The system we had was inadequate and I wanted to challenge the negative environmental press golf clubs can get in Germany anyway, by showing that we can prevent pollution," said Chris.

"I was attracted to the ClearWater system as soon as I saw it because, being below ground, it is enclosed and easy on the eye. We also turn off our irrigation system for winter, but because ClearWater uses recycled water that won't freeze because it's underground, we can still clean our large fleet of mowers and other equipment with it."

Chris needed to be sure that the system was compliant with EU and German legislation. The UK manufactured system has undergone exhaustive testing and meets the necessary requirements of EN858 (equivalent to DIN 1999-100 in Germany). Highspeed passed official certification to Chris by way of proof and Chris consequently signed the deal.

David Mears said: "We are delighted to sign our first contract with a German golf club. Chris is a proactive course manager and this future proof system means that the club has conformed to stringent and ever-changing law.

We would urge all golf clubs in Germany, just as many have in the UK, to look at how they clean their course machinery, and check to see if this conforms to the law. It costs a lot less to purchase a ClearWater system than it does to have your club closed down because it is in breach of environmental legislation."

With over 200 ClearWater systems sold in the UK, Ireland, France, USA and now Germany, Highspeed Group Ltd with their unobtrusive, very efficient and cost effective system are certainly going places!