Sporting a new engine and compressor combination, manufactured by Pneumofore, the Turin based Italian light engineering specialists who have been producing air compressors and vacuum pumps since 1927, Airforce G retains the hydraulically driven JCB hammer and rams used in the Airforce prototype, and remains true to the original Terralift technology.

Terrain's MD David Green, who has designed and built the new machine, says that at two feet shorter, and approx 300Kg lighter, Airforce G is more compact and has greater manoeuvrability than its predecessor without loosing the one tonne of down force available to deliver the probe one metre down through compacted soil.

"Airforce G has lost 250Kg on the new engine and compressor alone," he explains, "and we've been able to reduce the wheelbase by half a metre, bringing the overall machine weight down to the one tonne target. It's also quieter due to the sound proof casing."

The original Airforce machine will continue to operate on large open areas such as football pitches, parks and racecourses.

Headland has dramatically increased the company's pesticide portfolio with the launch of two new products at BTME.

Snare, aimed at the amenity turf market, is a thiophanate - methyl based systemic fungicide, which is active against common diseases such as fusarium patch and red thread as well as dollar spot. It has the added advantage of activity against earthworms and can be used for the suppression of worm casting.

Headland is aiming at increased levels of efficiency, by suggesting tank-mix combinations with contact fungicides such as Chipco Green, resulting in combined curative and preventative control. Where necessary, Snare can also be combined with Headland's 'Cyren', insecticide for control of both casting worms and leatherjackets in one application.

Mark De Ath, Headlands Operations Director comments "The specially developed surfactant systems in Tangent mean that it has no hazard classification and in the environment Tangent is not classed as harmful to aquatic life". Absorbed by the foliage and translocated throughout the plant and root systems, Tangent is effective on annual and perennial grasses as well as broad-leaved weeds, but inactivated on contact with the soil and rapidly degraded by microorganisms.

Tangent's high rate of active ingredient means a 20% lower application rate than other glyphosate formulations. Its use is recommended on non-crop areas such as hard surfaces, paved areas, highways and industrial sites, as well as around trees and shrubs in landscaped areas and forestry situations. Tangent is also recommended for aquatic areas.

Tangent is available in a choice of one, or four litre containers, while Snare comes in
five litre packs.

For further information on either Snare or Tangent, contact Headland on Tel: 01223 597834. or email them at info@headlandamenity.com

Vitax launched Insignia, their first new fungicide for many years, which they confidently claim gives the most effective and long lasting control of Fusarium Patch Disease on the market. "And we can prove it", says Clive Williams, the company's Sales & Amenity Manager. 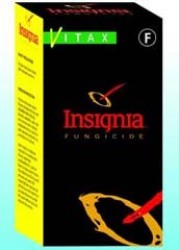 Insignia, which has been developed by BASF, has undergone trials over several seasons on 25 different turf grass cultivars throughout the UK and Europe. This fungicide, first registered in cereals, is active throughout all stages of the disease from initial spore germination and leaf infection through to the prevention of further sporulation.

"During trials Insignia was applied at up to four times the registered dose rate to test for phytotoxicity and it came through with flying colours", continues Clive Williams. "We also discovered side benefits which include an increase in stress tolerance, an increase in nitrogen uptake potentially leading to a greening of turf. ''

Insignia, which is active against Fusarium Patch, Red Thread and Dollar Spot, is available as a water dispersible granule in a container sufficient to treat 2,000 sq.m. of turf.

HOW GOOD CAN A GREAT GRINDER GET?

SUBSTANTIAL new modifications have been made by grinding specialists Bernhard and Company to their flagship Express Dual and Anglemaster grinders.

WORLD-WIDE they are used to create an inavaluable in-house grinding facility, as greenkeepers appreciate the vital importance of regularly sharpening blades.

SETTING the mower blades with no-contact helps keep grass plants healthy and less prone to disease - ensuring the course will withstand the rigours of play - even for 366 days of the year!

Express Dual 3000 - highly accurate spin grinder features:
* A new improved chassis construction has been designed to give the grinder even greater rigidity.
* Developments have been made to make the electrical system even easier to access for maintenance purposes.
* New machine guarding has been fitted for even greaater safety, allowing easy accessibility for set up purposes.
* Added safety feature, with a key used to allow the operator access to the service function and set-up modes.


Express Dual 3000DX
* An enhanced colour touch screen makes this machine extremely easy to operate - with insrtructions in the form of animations and icon driven selection. All staff can be easily trained to use this fully automatic grinder, maximising operator productivity.
* Evolution of the software and greater processing power has made the grinder even easier to operate and the automatic grind cycles have been further refined.

GREENFLASH from leading seed breeder TOP GREEN has all the hallmarks of a highly superior perennial ryegrass cultivar for the golfing market. Dramatic developments have taken place in the last ten years - since Top Green first launched its professional grass seeds to the sports, amenity and landscaping sectors. 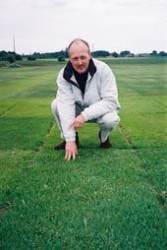 Cultivated to cope with year-round golf, Greenflash has exceptional wear resistance and performs well - even in the shade. "Where it cuts costs most is in its slow re-growth characteristics," says Stephen. Tests using twenty varieties and eight seed mixtures showed that the average amount of clippings per cut weighed in at 140gms - but with Greenflash this reduced drastically to 20gms. Less mowing means considerable cost savings in man and machine time.

With historical roots in France, Top Green is a joint venture between leading seed company Limagrain and European lawn grass producer DLF Trifolium. Setting the highest standards, their grasses have been developed - using their own plant materials - at four selection stations in Europe. Testing more than 100,000 plants each year on 45,000 plots, seed is then rigorously tested at 16 sites including the UK, South of France, Germany, the US and China. "Tailor made trials are part of our extensive service to clients," says Stephen. "We can create new mixtures specifically for them to overcome their particular turf problems."