Click on the headline to view the appropriate press release.

A MOWER FOR ALL SEASONS: NEW BUNTON WALK-BEHIND FROM CHARTERHOUSE

NEW CHARTERHOUSE RICHMOND CATALOGUE IS NOT JUST FOR FORESTERS…..

A radical re-think in the ways that turf managers use perennial ryegrass was advocated by the specialist seed breeders, Barenbrug UK, at BTME 2003, held in Harrogate from 21-23 January. Astonishingly fine-leaved varieties that have been purpose-bred by the company after years of painstaking research mean that perennial ryegrass can now be used in fine turf situations like golf greens, as well as in its traditional role as the main component of mixtures for winter games pitches and other intensively used turf areas.

Cultivars like Barenbrug's exclusive Bargold and Bareine perennial ryegrasses are unlike their older counterparts, being extremely fine leaved and tolerant of mowing down to as low as 5mm. Their superior shoot density creates a dense resilient sward, but they retain the species' traditional benefits of quick establishment, wear tolerance and disease resistance, giving turf professionals the best of both worlds.

Barenbrug say that these new cultivars establish well with other fine species like fescues and bents, giving a uniform, aesthetically pleasing sward, with a true playing surface. The company adds that 100% blends of various perennial ryegrasses including the new cultivars can be formulated to create top quality tennis courts, cricket wickets, golf tees and fairways, and heavily trafficked golf greens.

"Barenbrug are unique in offering a modern variation on a traditional theme. By thinking differently and adopting our exciting new perennial ryegrass cultivars, turf managers and sportsmen can gain a significant competitive edge."

To make the information as relevant as possible to the end user, each cultivar is assessed under several important criteria. These comprise visual merit (an overall measure of suitability), shoot density, live ground cover (important for winter sports turf), slow re-growth, fineness of leaf, cleanness of cutting, colour and freedom from disease.

Users can identify the properties that are important in their individual situations and choose cultivars scoring well for those characteristics. This information can also help groundsmen, greenkeepers and specifiers in their discussions with seedsmen, and in understanding the composition of grass seed mixtures.

The tables in 'Turfgrass Seed' include sub-sections listing results achieved by new cultivars tested in the most recent STRI trials. This gives an insight into varieties at the cutting edge of turf research.

Thatch is primarily a layer of poorly draining organic material in the soil, starving grass of nutrients and weakening the sward. The Koro deep verti-cutting rotor fits onto the Campey flagship Koro Field Topmaker machine in place of the standard rotary blades that completely remove top layers of soil for quick ground renovation.

Offered in 1.2m and 2m widths, the verti-cutting rotor incorporates a series of 1.5mm or 3mm thick blades, available in hardened or tungsten-tipped versions, at 40mm spacings. These blades cut through and remove the fibrous thatch material, encouraging water, air and nutrient permeation. They also deal with troublesome lateral grass growth that can lead to weak, shallow-rooting turf. Maximum operating depth is 5cm.

Typically, thatch removal by other methods can lead to the accumulation of high volumes of waste material on the surface, requiring collection. This is no problem with the verti-cutting rotor: integral paddles lift the removed material upwards and throw it towards a side-discharge conveyor, which deposits it neatly into an adjacent trailer. 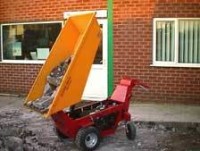 Powered by a 6.5hp Honda petrol engine, the machine features hydrostatic drive for easy control of speed between 0-5mph. One of the features that sets it apart from the competition is the inherent strength of the tipper body, enabling it to be filled with items such as excavator buckets, and materials such as concrete, store, hardcore, soil and sand. Maximum hopper capacity is 400 litres, and the maximum laden carrying weight is 750kg.

Measuring only 85cm (34in) wide, the Super Scub Hydra is narrow enough to be driven through most doorways and lends itself to work indoors as well as outdoors.

Campey Turf Care Systems, who offer a wide range of specialist grounds maintenance equipment, believe that the Super Scub will quickly establish itself as an invaluable workhorse for the construction and hire industries, as well as garden centres, nurseries, local authorities, parks and cemeteries departments.

A MOWER FOR ALL SEASONS: NEW BUNTON WALK-BEHIND FROM CHARTERHOUSE 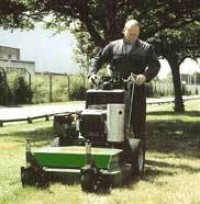 Made in the USA by the Bunton organisation, which claims to be one of the world's largest manufacturers of commercial rotary mowers, this 36in (91cm) wide, rear discharge unit offered by Charterhouse features a rugged design to cope with the intensive and rough handling typical of use in local authority departments, contracting organisations and hire companies. 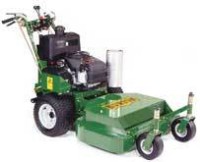 Charterhouse Turf Machinery believe that the Bunton mowers are the perfect complement to their existing 'DR' trimmer range of walk-behind, wheeled brushcutters that can tackle heavy scrub and undergrowth.

"I was actually one of the first people to introduce the Bunton into this country some twenty years ago," comments Charterhouse Director Philip Threadgold, "and helped with the development of the rear discharge deck, preferred by UK users, so in some ways you could say the Bunton has come home !"

NEW CHARTERHOUSE RICHMOND CATALOGUE IS NOT JUST FOR FORESTERS….. 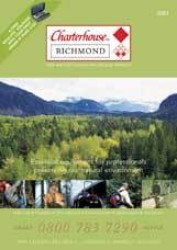 "Our 2003 catalogue has everything required by professionals who are dedicated to maintaining and protecting the environment," says Charterhouse Richmond Director, Philip Threadgold. "To show that we share their commitment, we pledge to donate £1 to the Tree Council Charity for every order over £100 that we receive." 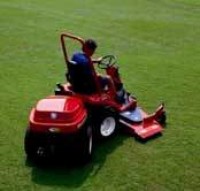 Power comes from a 22hp or 30hp Yanmar diesel engine designed for low levels of noise and emissions, an increasingly important consideration for many operators. The independent 1,000rpm PTO has an automatic brake that stops equipment in seconds, as required by the latest EC legislation. Hydrostatic transmission comes as standard, giving working speeds from 0-7.5mph and road speeds of 0-15mph.

One of the Rondo's popular attachments is a dedicated mowing attachment has three rotary blades giving a 1.5m cutting width, at a height from 1.5-9cm (?in - 3½in). The 1100-litre capacity hopper that contains grass clippings and debris can be raised and emptied hydraulically for maximum efficiency.

The Rondo will be officially launched on the Charterhouse Turf Machinery stand at the BTME Exhibition in Harrogate, from January 21-23. 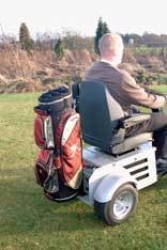 Featuring robust, all-steel construction, the environment-friendly G150 utilises a powerful 24v DC 150Ah battery designed to give a minimum of 54 holes per charge. The battery has a 5-year guarantee. Regenerative braking means the 12 battery cells are kept topped up whenever the brakes are applied. At 150kg (330 lbs) without batteries (and only 270kgs with) the unit weighs considerably less than many other rivals and exerts less pressure on the turf. A high-quality transaxle with precision-ground gears lubricated in an oil bath is fitted for superior reliability. With high ground clearance at 135mm and a tight turning circle only 2.3 m in diameter, the G150 manoeurvres easily about the course.

Utterly user-friendly, the G150 has a simple twist-grip throttle, and a fully variable drive system for maximum control and quick changes of speed. Touches of quality include a tee, ball and scorecard holder, lift-up arm rests and an adjustable seat. Options include a twin golf bag carrier and lights. Weather protection is also available. The unit is particularly suitable for older or less able golfers, who perhaps otherwise may not be able to play.

The G150 can be fitted with a quick-attach trailer, turning it into a useful work vehicle. The body can also be colour co-ordinated to match club or corporate liveries. 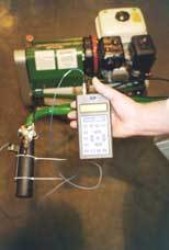 Excessive exposure to vibration can cause health problems, such as 'white finger', with employers potentially vulnerable to damages claims. Choosing low vibration equipment helps show responsibility in meeting their duty of care.

At Dennis' testing facility, sensitive meters determine the hand arm vibration levels of equipment at the point of contact. This figure is used to assess how long a machine can be used in a working day before the operator reaches the maximum exposure level permitted under the forthcoming EC laws.

Armed with the test information, Dennis' engineers can fine-tune equipment to minimise vibration. For example, on one of the company's FT mowers, a simple re-design of the handlebars gave a 30% reduction in vibration readings.

Dennis can provide detailed test results and state vibration levels for all their machines, so that managers of local authority departments, contractors, National Trust properties and other amenities can make an informed choice.

As further proof of the value of this information, several leading national and regional equipment hire organisations are already quoting manufacturers' hand arm vibration figures in their catalogues, to help customers to meet their obligations.

SIS have devised a 10-step programme of pitch renovation or replacement, enabling surfaces to be constructed from scratch in a matter of days. Unlike some competitors, each SIS contract includes 12 months full maintenance to ensure the highest standards. Alan Ferguson, who was voted the Institute of Groundsmanship's Football Groundsman of the Year in 1999, will be able to tailor maintenance regimes to clients' needs, with special considerations to aspects such as drought tolerance, the problems of frost and shade etc.

SIS carefully assess a new pitch's requirements, designing a complete package of a drainage system, rootzone and turf that maximises usage potential. Special equipment is used for speed and efficiency.

Alan Ferguson will remain as Head Groundsman for Ipswich Town. His skills were essential recently in overcoming potential problems caused by the construction of new high stands at the Portman Road ground. He recommended a customised shade-tolerant seed mixture that would promote healthy turf growth.

"I'm delighted and flattered to be appointed Non-Executive Director for SIS," comments Alan Ferguson. "My involvement will also help keep Ipswich Town at the leading edge of turf technology."

In addition Alan Ferguson has extensive experience of artificial sports surfaces, and this will also be of significant benefit to SIS who provide not only the design and construction of natural sports pitches but also artificial grass pitches amongst their services.