by External source
in Conservation & Ecology
on 17 Jul 2014

More people are buying buddleia for their gardens, but it's classified as an invasive species and is a problem on British railways.

It's hard to walk by a railway line in Britain and not see buddleia.Along fences by the tracks and almost any patch of waste ground, you will notice the long, slender clumps of flowers, usually lilac but also blue, deeper purple or white, at the end of long, arching branches.

BBC weather forecaster Peter Gibbs says the mild, wet winter will have improved germination and growth this year, especially in areas where water normally drains away quickly, such as derelict urban sites. "Buddleia is an opportunist that's always ready to capitalise on any slight advantage."

Sprouting from seemingly every derelict building, it stakes an increasingly plausible claim for the title of Britain's national flower.

And the plant is increasingly a favourite with gardeners. Homebase saw a 20% sales increase over the past four months compared with the same period last year. 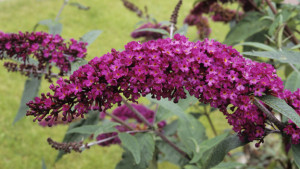 It's popular for both the range of colours and its butterfly-attracting properties. The Royal Horticultural Society describes buddleia in all its forms as "beloved" to gardeners.

But Buddleja davidii, to give its latin name, which originated in China, is viewed by the Department for the Environment, Food and Rural Affairs (Defra) as an invasive non-native species. Its "invasion history" has been charted from its introduction to the UK in the 1800s to the first record of the plant in the wild in 1922.

Defra says the highly-dispersible seed of what was originally a garden plant has resulted in extensive buddleia populations in the wild, where the shrub has often out-competed native vegetation and reduced biodiversity.