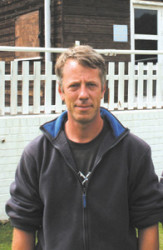 Maintenance of any sport surface needs to be paid for, that's simply a fact of life. But exactly what is it that you should be paying for and what are the actual priorities as far as club cricket goes? Jon Lawrence, Grounds Manager at Weston-super-Mare Cricket Club looks at the basic costs involved

Whilst every cricket groundsman would probably like to have a county standard square that often isn't a practical ambition. Local ground conditions (what's in the soil etc.) and budgetary restrictions will greatly influence the standard of surface that can be produced.

Regardless of the standard of cricket played, the basic maintenance is exactly the same:

Autumn: renovations, this is what will define the standard of your surface for the coming year.

Winter: cutting regular (as required) to encourage tillering and develop a dense sward.

Summer: track preparation for actual use.

Everything we do to a cricket ground is designed so that we get the best possible results in the summer months, but it is what is done outside of the summer months that will have the biggest bearing on how good a playing surface we produce.

You won't produce a good playing surface without the correct resources. At the most basic those resources are: seed, topdressing (loam) and machinery. Seed and topdressing need to be bought, machinery needs to be maintained. There often seems to be many discussions/comments on how much it costs to maintain a cricket ground. So here are (roughly) my budget requirements for any given year.

Loam: Six to eight bags per track at approximately £4 per bag. I'll go through some 216 bags (27 tracks in total) during renovations, and I reckon to use around two. bags per track during the season (for end repairs etc) which means that I need 270 bags of loam.


Seed: The recommended sowing rate for the majority of Dwarf Rye grasses is 35g/m2. When carrying out my renovations I'll sow at 70g/m2 as I believe 35g/m2 gives too sparse a sward. At 70g/m2 I'll use 4.7kg of seed per track which means that I need a total of 126kg of seed. In spring I'll overseed again, this time at 35g/m2 which means I need some 63kg for spring. During the summer months I'll use around another two bags (40kg) when carrying out repairs. That means I need a total of 230kg of seed each year - rounded up that means 12 x 20kg bags.

Fertiliser: I only apply fertiliser to my squares, the outfield I pretty much allow to take care of itself. I don't box off clippings on the outfield. Exactly what fertiliser you need could vary with the makeup of your surface (get a soil analysis done and find out what you've got).

I have three types of fertiliser that I'll generally use on my squares. I'll apply something like 8:12:8 at around 20g/m2 during renovations, and something like 4:6:8+Fe (again at 20g/m2) in October and February. Around Christmas time I'll put some liquid Fe on. During the actual playing season I don't apply granular fertiliser at all but I will use a nitrogen fertiliser when taking tracks out of play - just to green them up and keep them looking nice. So I'll use around two bags of 5:5:12 and a further four bags of 4:6:8.

For liquid Fe I use a cheleted iron, this comes in a 10 litre container and I apply it at 17l/ha. I use about three litres per complete application - so 10 litres is going to last me two years.Nitrogen - I'll be making myself this year - so there's no cost directly involved in that.

Machinery maintenance: All machinery needs maintenance in order to keep it working at its best. Machinery should be adjusted prior to use and always cleaned after use. You need to check grease points, cables, and oil chains on a regular basis.

Obviously, you'll need to put petrol/diesel in them regularly as well. At the end of each season (at least) you need to get your cylinder reels reground and carry out more comprehensive annual maintenance of all your machinery (replacing worn parts and things like spark plugs, belts etc.). For 'normal' maintenance there is no reason why you can't do it yourself.

Grease guns aren't expensive and a can of suitable oil won't break the bank. I allow £250 per year for machinery sundries - cables, grease, oil, plugs, etc. etc. With cylinder grinds I assume that there are two wicket cutters and an outfield triple at an average of £150 per cylinder
Diesel/petrol: for this example budget I reckon I use around 250 litres of each per year. That's less than 5 litres a week - which is about right.

Water: Water costs are something that many groundsmen don't consider when looking at their budgets. A quick calculation shows that I would expect to use about £600 worth of water in any given season.

Chemicals: Compared to some I don't use many chemicals. I'll spray the squares with carbendazim twice a year using around 0.75 litres per application. So 5 litres will last me some three years. I actually allow for 5 litres per year at present.

I'll spray the outfields with a general selective, once per season and, at the moment, I have a few areas that need spraying for leatherjackets.

In addition to all the above the club will need to factor in the cost of all insurance.

That completes what I budget for to maintain two grounds, and I think it is the minimum that I can spend without starting to lower the standard of facilities.

Is it possible to spend more?

Certainly. I've hardly included any work on the outfield in the above budget. If you start looking into scarifying, topdressing, overseeding, verti-draining outfields then you can easily double the above budget.

Overseeding my outfields alone would need some 840kg of seed which I'd expect to come in at around £2500, to topdress with say 3mm of product would need some 72m3 of topdressing which again would be at least £2500. In addition to those costs you'd need to factor in hiring scarifying equipment and disposal of the arisings.


If you want to maintain a sports surface to the best possible standard then it costs money. I believe it is our job as Groundsmen to help committees understand this.