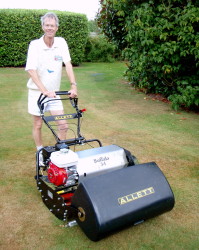 An Allett owner and user for more than 25 years, well-known cricket commentator and writer, Christopher Martin-Jenkins, first became aware of the brand back in the late 1960s.

"I remember seeing Allett mowers in action cutting the outfield on a number of first-class cricket grounds," he recalled. "Having long admired the finish produced by the machine, I was determined to have an Allett of my own and purchased in 1983 a 36in Regal with trailing seat to maintain the lawns at our former family home in Sussex."

That machine served Mr Martin-Jenkins well until he moved recently to a house with a smaller garden. "The Regal was just a bit too big for the grass areas at our new home," he explained. "I needed the ability also to cut somewhat longer, tougher grass so I asked Allett for their advice."

The machine recommended, and subsequently purchased by Mr Martin-Jenkins, was a Buffalo 34 equipped with an 8in diameter, eight-bladed cutting cylinder. Although only slightly narrower than the Regal, the Buffalo 34 is a lighter and more compact mower able to work effectively in tight spaces and cut longer and coarser grass than would normally be asked of a Regal.

"I like the machine," says Mr Martin-Jenkins. "Not only is it easy to handle, but it's quiet and economical, producing the standard of finish that I have long associated with Allett mowers. The brand remains a wonderful example of British engineering at its very best."

Picture :-Cricket commentator, Christopher Martin-Jenkins, with his new Allett Buffalo 34 mower, a replacement for the Regal 36 mower that he had owned for 26 years.