by External source
in Industry News
on 13 Oct 2012

0 Building an industry for the future At its annual conference at Capel Manor Gardens on Saturday 6 October the Institute of Horticulture (IoH) highlighted its campaign to inspire young people about careers in horticulture and demonstrated the on-going support the IoH provides to professional horticulturists in their progression through the many rewarding career paths in the industry.

The conference was preceded by the Institute's AGM at which Leigh Morris FI Hort was appointed as the new IoH President. Leigh said "I am totally delighted to have taken on the role of IoH President. With the petition for Chartered status recently submitted, and a marketing plan and recruitment strategy being drafted and the current ramping up of the Grow Careers initiative, administered by the IoH, it is certainly exciting times immediately ahead, both for myself and the IoH"

The conference was a sell-out with over 90 delegates, including both members and non-members, representing a wide range of sectors across the industry. A series of expert speakers maintained the IoH reputation for delivering high quality conferences which bring together likeminded professional horticulturists and students to tackle industry issues and hot topics.

Lord Taylor of Holbeach CBE, former Parliamentary Under Secretary of State, Defra, delivered the IoH James Bruce Memorial. He said "Horticulture is hot!" There is huge potential for British horticulture but to be the best the industry needs "investment, innovation, technology, research and skills".

David Domoney FI Hort, designer and TV presenter reminded delegates of the need for radical techniques to restyle the industry's image to attract new blood. Taking inspiration from the presentation of careers, such as nursing and the fire service, David said that horticulture needs to promote how it meets young people's aspirations. He suggested representing horticultural careers to reflect "K-KPI's Kids Key Performance Indicators - money; self-respect; respect among peers, excitement and the keys to independence" 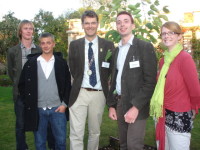 Delegates also visited the recently restored Myddelton House Gardens, the home of plant collector Edward Augustus Bowles. Head Gardener Andrew Turvey enthusiastically explained the restoration project which has been financed from the Heritage Lottery Fund and delegates were treated to tour of the gardens on a beautiful sunny autumn afternoon.

A tour of Capel Manor Gardens followed with a tree planting to commemorate the election of Leigh Morris FI Hort as President. After Dinner speaker Phil Askew MI Hort, Project Sponsor Parklands and Pubic Realm, London Legacy Development Corporation, gave an insight in to the exciting future of The Queen Elizabeth Olympic Park which, after its transformation post Games, will be the largest new urban park in the UK for over a century.

Summing the day up, new IoH President Leigh Morris FI Hort said "The IoH conference last Saturday at Capel Manor Gardens was fantastic, with extremely knowledgeable and inspiring speakers, a wonderful location, and a great visit to Myddelton House Gardens with a full house of 90 key delegates from the industry. It was a tremendously positive event, with much enthusiastic feedback from those who attended. People will need to book early next year!"