2 Building for the future 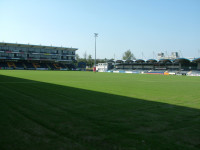 As a former first team player of Worcester Rugby club, I always keep an eye out for their results and progress in the Premiership. Since the club's arrival into top-flight rugby, Worcester has gone from strength to strength. The growth has not just been on the field of play, but also around the ground. It's great to see a club with ambition, even way back in 1979 when I was playing, Worcester were renowned as having the best ground and changing facilities.

Success breeds success, the club have already started work on increasing the capacity of the ground from 9,700 to 10,800 for the start of the new season with the rebuilding of the North and East stands. The plan is to further increase the capacity to over 16,000 by the start of the 2007 season.

The new stands will eventually house bars, shops and toilets. The site is also earmarked for further improvements that will provide a Park and Ride facility and a David Lloyd Tennis Centre along with two new grass pitches that will accommodate the junior rugby section of the club. In fact the work on these pitches has already begun with Pugh Lewis Contractors awarded the work in June, with the aim of being ready for play by November. 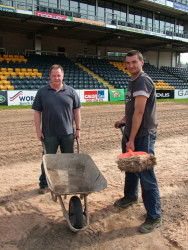 These improvements also coincided with the complete refurbishment of the main stadium pitch. Another contractor, Premier Pitches was employed to slit drain and resurface the old soil based pitch.

Carl Pass and his team also began work in June. The work involved 'sand mastering' the pitch at 200mm centres to reconnect the surface profile with the original pitch drainage system.

The entire surface vegetation was stripped off using the Koro to establish a clean surface before 500 tons of new Fibresand material was integrated into the top 100mm of the existing soils. Once spread the area was re-leveled and consolidated prior to a full overseeding process with DLF Pro 81. The pitch surface was given a light rolling afterwards to finish.

Carl was quick to point out some of the issues when working with Fibresand materials,
"It sounds easy spreading and leveling this material, however to get it right you require the correct machines, an experienced operator and suitable ground and weather conditions. An operation on this scale can go horribly wrong if the timing isn't spot on."

"We usually do 2-3 passes with the Koro to completely remove the grass sward/ vegetation leaving a good finished level surface to continue to work on. Fibresand is more difficult to work with when it's dry. It takes a lot of experience to get it right, especially when achieving the final levels before sowing."

"It is nigh on impossible to achieve accurate levels and consolidation when the materials are dry, you need plenty of water to keep the profile damp."

The whole process from start to finish took Carl and his team four days to complete, although the weather played its part in trying to ruin the end result. The day after the seeding was finished, Worcester had one of the heaviest rainstorms of the summer that washed much of the seed off the pitch. Fortunately the contractor was quick to remedy the situation, returning to over sow and aerate the pitch. Within 10 days of the additional work the seed had germinated and started to establish. 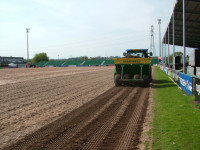 The task then fell to Derek Woodall, Head Groundsman at the club, to ensure the pitch was watered and maintained.
Derek applied 16x 25kg bags of slow release 19:19:10 NPK fertilizer to help establish the sward quickly in June before a further application of five x 25kg bags of 20: 10: 10 in Mid July.

Working with a fibre-reinforced surface is new territory for Derek, but he's relishing the challenges ahead. The club is investing in some new machinery as well to enable Derek to keep the playing surface in excellent order.