0 Building on history at Ashley Wood

Ashley Wood Golf Course, near Blandford, Dorset, has enjoyed almost 10 years of service from New Holland tractors, relying on them for the ongoing development of the course as well as for grounds maintenance.
Head Greenkeeper Mark Sherwood has been at the club for 16 years, and for the last six he has led the greenkeeping team.
The club has a New Holland 1920, purchased from new in 1999 and a TC40 tractor purchased in 2005. 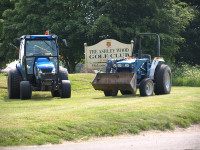 Mark says: "We bought the first tractor in 1999, mainly because the package was very attractive. I could see that it was easy to use with no fussy elements, the local dealer was on the doorstep should anything go wrong with it and it was well priced. We looked at all makes and decided New Holland came up trumps!"
Getting the specification right for the range of tasks the tractor needed to perform was key, he emphasises: "We needed to use a back hoe and a front loader and felt confident that this was the best tractor for the job as it was sturdy and the range has the reputation of being reliable. All attachments were fitted by our excellent local dealer, C&O Tractors. They even fitted a 4 -in-1 bucket for us so we could do construction work with the tractor."
Since 1996 developments have enhanced the course, adding improved tees and fairway constructions. A new irrigation system was installed to maintain the standard of the greens during the summer months.
"We do a lot of in-house construction," Mark explains, "This allows us to create exactly what we want and to maintain the facilities to the highest level possible."

The 1920 has never broken down and is still working as it did nine years ago, he confirms.
"It is a real workhorse that we just could not do without. Even in the winter months, we insert the key and turn it and the tractor fires up instantly every time! A couple of lads on my team actually prefer using the 1920 because they know they cannot damage it, it would never break as it is built so well!
Ashley Wood Golf Course needed another tractor to add to the line up in 2005 and Mark says that New Holland was the immediate choice.
A 40hp TC40 from New Holland's purpose-designed compact range was specified and it is in use every day.
"We use the TC40 all day long and we do everything with it," comments Mark. "It is used it to spray, aerate, for hauling trailers, slitting and as a general run around."
"I have a cab on the new tractor, which is lovely! In the winter it's a god send because of the heating, in the summer it is even better because of the air conditioning," .Although, he admits: "The best feature for me is the CD player - I can whistle while I work! The simplicity of the controls is great, anyone can use it, the gear box is also pretty robust and I don't think you could break it if you tried."
Mechanically the differences between the tractors are minimal, but the TC40 benefits from New Holland's latest styling and attention to the operator environment. "Appearance and comfort have really evolved," says Mark, "The newer tractor is also more driver-friendly, of course it is going to be nicer to use!" 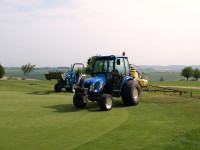 "We have always found the 1920 to be pretty economical, and the newer tractor is just as frugal, which is surprising," he comments. "As it slightly bigger you would have thought it would have used a lot more fuel.
He also praises the tyre specification available for the new tractor. "The TC40 has Galaxy tyres on it which are really good. You can fill the loader up to the top and drive over tees and there are no marks whatsoever. Good tyres are essential on a golf course and I would recommend them to everyone. I have been told I could change the tyres on our 1920 but we don't want to pull it about, it has grown accustomed to its old turf tyres!"

Ashley Wood Golf Club was built by Sir William Henry Smith-Marriott in 1896 and was the fifth club to be established in Dorset. The original course was 2642 yards in length consisting of nine holes complete with grass bunkers.
It was laid out over historic countryside, including Buzbury Rings, an ancient ring fort, tumuli and defensive dykes all of which dated back to pre-Roman times. These ancient remains were incorporated into the layout in various ways and without doubt added to the difficulty of the course.
In 1952, the course, having become slightly derelict during the Second World War, was purchased by Roy and Jackie Carey. In 1960 the Careys built a second course of nine holes, with two tees on each hole, giving as total yardage of 5107 yards.


On the 7th May 1994 and almost 100 years from its inception The Ashley Wood Golf Club, having been extended, was re-opened as an 18 hole course with a yardage of 6276