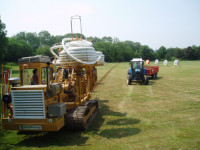 In the early nineteen eighties, no one seems to be able to remember the exact year, Paul Burtonshaw of SportsDrainage was asked if anything could be done to improve the playing surface at Old Leamingtonians Rugby Club. After a twenty year relationship which has transformed the clubs rugby pitches, the answer seems to be yes.

After returning to the area to join the family company, My father - Paul - decided to continue playing rugby, a sport he had first played as a school boy in 1971. He re-joined Old Leamingtonians sometime after 1982, playing in the back row and then in the second row. In until recently he was still 'playing' - I might say wandering around waiting for the bar to open - for the veterans.

Soon after re-joining the club my father was asked about what could be done regarding the condition of the pitches. He offered advice on the poor drainage and on the haphazard maintenance program. 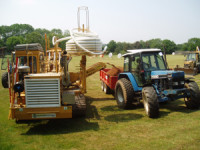 The committee asked SportsDrainage to reinforce the drainage on the first team pitch, the contract was successful and my father was asked to join the committee to over see further ground improvements. At first the budget for grounds maintenance was limited but after seeing its effectiveness, it was considered money well spent and the budget expanded.

This money was spent on drainage but also on maintenance. Previously grass cutting had been a chore, undertaken erratically by contractors, and fertilizer was rarely applied. My father employed a turfgrass Agronomist and he was asked to file an advisory report, the findings lead to a detailed maintenance program being devised.

The program is closely followed and includes fertiliser being applied at least four times a year - normally in the spring and autumn, overseeding and topdressing, vertidraining and earthquakering in alternative summers and when it has been necessary weed killing. Over the years the club has invested in maintenance machinery, starting with a Massey Ferguson Tractor and has continued recently with the purchase of a nine foot Votex Rotary Mower.

My father eventually became chairman of the rugby club between 2002 and 2004 and is still on the committee.

The original drainage, installed in the nineteen seventies when the club moved to its present location on Bericote Lane, was unable to cope with the demands placed upon it. The pitches were worn and muddy, grass growth was stunted - a familiar tale to those who regularly turn out on a Saturday afternoon. Eventually the committee decided something had to be done. 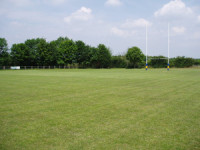 Many of the schemes were small scale but a long term commitment meant that they were always complimented by other works. At the conclusion of almost every season a project was devised and completed, step by step, year by year, the pitches changed character. Slowly but surely the mud receded and grass grew.

And this process is still on going, a recent development has seen the Royal Leamington Spa Archery Society utilizing a small section of previously un-used sportsfield. After a season of use it was decided that this area now demanded attention too. To alleviate this new issue Sportsdrainage have just completed another relatively small contract designed to dovetail with prior schemes. Plastic Land Drains, 80mm in diameter, have been installed at a depth of 500mm and connecting to an existing carrier drain which was part of a scheme completed by Sportsdrainage in May 1984.

This considered approach has proven to be very successful, and the results are a marvellous advert for the club. All twenty six acres look cared for and healthy, and are now a source of pride, Certainly Chairman Dennis Fisher seems satisfied, "The results have been terrific and it is a widely held belief that we have the best pitches in our area. Other teams always comment about how good the pitches are and our players bemoan away fixtures where conditions are always poorer than ours. It is worth mentioning that we have never cancelled a game due to a water logged pitch during my time as chairman. It takes a lot to keep a couple of hundred members happy, but the state of our pitches is one area in which no one complains."