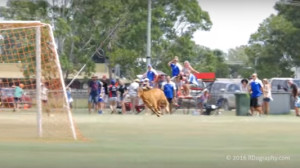 Players in a local football match in Australia were given the shock of their lives as a bull invaded the pitch and started charging at them.

The bull appeared calm at first, but showed his pace down the wing as he went for the unfortunate number two who was luckily able to show the beast a clean pair of heels.

Ryan Devenish, who filmed the incident, said: "I was with my family watching my nephew play his game at Federation Park in Maryborough, Queensland Australia."

"As I turned, I noticed the young bull standing about 15 feet away from us. In a split second it looked at me and charged about 5 feet in my direction before stopping, turning around, and heading back in to where it came from."

"After our game was finished, we noticed the bull had come back again. This time it ran down the sideline passed our field and then next to the bigger field as it was looking for an opening in the fence to get back through to its own paddock."

"For some reason it then turned around and this is when it decided to run at the players. Thankfully, no one was injured. However, if that player wasn't as fast as he was, or if the bull had continued to charge at myself and the parents sitting down earlier, the outcome could have been a lot different."