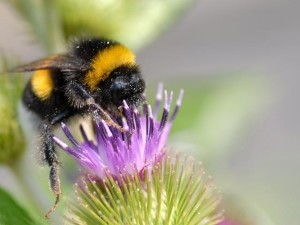 AN extinct species of British bumble is set to make a comeback in Kent.Experts have spent two weeks collecting short-haired bumblebees from farmland in southern Sweden and they will be reintroduced to the RSPB's reserve at Dungeness.

The last confirmed sighting of the species was in 1988 and they were declared extinct in 2000. The project, backed by Natural England, RSPB, Bumblebee Conservation Trust and Hymettus, began last year with an initial pilot reintroduction which followed four years of work with local farmers to create the ideal wildflower habitat for bumblebees across Romney Marsh and Dungeness.

Conservationists said the move is a 'sign of hope' for all the UK's bumblebees. Of the twenty-five native species in the UK, seven are declining and two are extinct - one of which is the shorthaired bumblebee.

Dr Nikki Gammans, project manager, said: "Bringing this extinct species back to the UK shows what can be done for wildlife by working together.

The queens we released in 2012 had a very tough time with last summer's weather, so it was vital that we returned to Sweden to bring back more queens to bolster the colony at Dungeness." "There's a lot more work to be done, but thanks to the local farmers in this area of Kent and East Sussex, our friends in Sweden, a crack team of volunteers and the wildlife experts involved in the project, there is hope for all our threatened bumblebees."