by Olivia Solon
in Chemicals & Fertilisers, Pests & Diseases, and Conservation & Ecology
on 12 Nov 2015

They're not called worker bees for nothing. Bumblebees buzz from plant to plant collecting food, and plans are afoot to give them another task while they do it - carrying pesticides to where they are needed. Bee Vectoring Technologies (BVT) in Mississauga, Canada, has opened a commercial production plant this month in the hope that the tactic will lure farmers away from indiscriminate crop spraying. 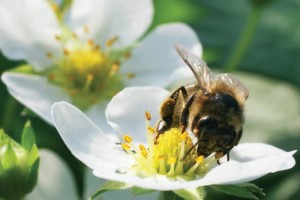 The idea involves placing a tray of organic pesticide powder inside a commercially bred hive. The powder contains a substance to help it stick to bees' legs and a strain of Clonostachys rosea fungus that is harmless to these insects but attacks crop diseases and pests. "It's a perfectly natural fungus found very commonly throughout the world. We've just developed a way to grow and harvest it efficiently," says Michael Collinson, CEO of BVT.

The bumblebees walk through the powder as they leave the hive. When they land on flowers to gather nectar and pollen, they leave a dusting of pesticide to protect the plant and future fruit.

Many crops can be protected this way, including blueberries and bell peppers. BVT plans to provide its dispensing system to a number of companies that have developed biological controls for other pests such as fireblight, which affects apples and pears. "Farmers usually spray the whole orchard and 99 per cent of it ends up in the wrong place," says Collinson. "We can deliver it locally and use 20 grams as opposed to 2 kilograms. It's much better for the environment."

David Passafiume, an organic farmer near Toronto, has been using the system for five years on 8.5 acres of strawberries and raspberries. "We were losing a significant portion of our crop each year to Botrytis and tarnished plant bugs," he says. Now those losses are negligible and profits have gone up by a quarter, he says. "I wouldn't even try to grow without it now."

The idea of using bees to carry pesticides isn't new, but BVT is one of the first to attempt to commercialise the approach.

"It's a good idea. It's better than spraying highly toxic chemicals over acres of land," says Don Steinkraus, an entomologist at the University of Arkansas in Fayetteville. "As long as it doesn't have a bad effect on the bees."

Jeremy Kerr, a biologist at the University of Ottawa in Canada, thinks it should only be used inside greenhouses, away from wild bees. If used outside, he says, it could have unintended effects on non-target plants or other pollinators.

Another concern relates to BVT's use of commercially bred insects. "Domesticated bumblebees carry pathogens that can be transmitted into the wild," says Sydney Cameron of the University of Illinois at Urbana-Champaign. "That issue has not been resolved."

The company plans to work with other companies to deliver inorganic pesticides that have been deemed safe to bees by the US Environment Protection Agency. But the agency typically tests only on honeybees, using them as surrogates for all pollinators, despite differences between bee species.

"Honeybees and bumblebees differ in their responses to pesticides in ways that can be hard to predict," says Dave Goulson at the University of Sussex in Brighton, UK. What's more, the EPA generally tests only to see if chemicals are acutely toxic, rather than looking at the effects of long-term exposure.

Collinson says the company is "very cautious" about the insects' well-being. "Our business is bees. We need these guys to fly for us."

For the original article, visit www.newscientist.com.