by External source
in Conservation & Ecology
on 25 Feb 2014 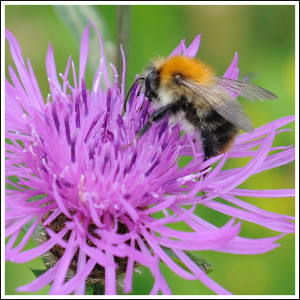 Researchers have found that two diseases harboured by honeybees are spilling over into wild bumblebees.

Insects infected with deformed wing virus and a fungal parasite called Nosema ceranae were found across England, Scotland and Wales.

Writing in the journal Nature, the team says that beekeepers should keep their honeybees as free from disease as possible to stop the spread.

"These pathogens are capable of infecting adult bumblebees and they seem to have quite significant impacts," said Professor Mark Brown from Royal Holloway, University of London.

Around the world, bumblebees are doing badly.

In the last few decades, many species have suffered steep declines, and some, such Cullem's bumblebee (Bombus cullumanus) in the UK, have gone extinct.

Scientists believe that the destruction of their habitats - particularly wildflower meadows - has driven much of this loss, but the latest research suggests that disease too could play a role.

The researchers looked at two pathogens commonly found in honeybees and found they can also infect adult bumblebees.

In honeybees, deformed wing virus (DWV) causes significant problems. Its severity seems to be exacerbated by the presence of another widespread parasite, the varroa mite, causing entire colonies to collapse.

Bumblebees do not carry the varroa mite, but the scientists found that those infected with DWV had a dramatically shortened lifespan. The fungal parasite has also been shown to have an impact on bumblebee longevity.

Prof Brown said: "A significantly shorter lifespan in the field would impact on their ability to go out and collect food and look after other bees."

The researchers found the diseases were already prevalent among wild populations.