As news headlines continue to be dominated by climate change most people already know that the predicted effects on Oceania weather patterns will not necessarily be long warm summers.

Drainage issues have never been as pressing as they are now after a summer of such excessive and intense rainfall in Northern Australia . Many golf clubs have come into the autumn with very high ground water levels and will waterlog with very little extra precipitation over the winter months.

Course Managers are looking at various ways of installing cost effective drainage systems,particularly in bunkers, which have been badly effected by high and intense rainfall, often remaining like duck ponds for days following sudden downpours.

A relatively simple solution to golf course drainage comes in the form of Aquadyne drainage panels manufactured by Econoplas Ltd.

Aquadyne is a unique drainage material manufactured from 100% post use non-toxic recycled materials. It offers a cost effective and rapidly installed solution to many of the serious drainage problems encountered on the golf course.

It comes in one-metre lengths, so installation needs no heavy machinery. The material is lightweight and extremely durable, the open pore structure fights against clogging, settlement and with flow rates ten times greater than sand.

The current Managing Director,John Gaskarth, founded the company in 1997. Aquadyne was developed by John to solve persistent drainage problems on his own farmland in Whitby. The success of its performance is that it combats the basic problems of conventional drainage: -settlement - compaction - infiltration - migration - drying out.

Early versions of the product proved that it had tremendous potential to solve drainage problems quickly and permanently, and John then approached Ian Lavelle, course manger of Whitby Golf Club to test the product on some golf cours eapplications.

The course had a number of problem areas where Ian thought Aquadyne would be truly put to the test, yet it very quickly became apparent that it worked exceptionally well.

"Fairways, semi-rough, pass-over points, walkways were vastly improved where it was applied, not to mention our biggest success story, the bunker at the first hole. With Aquadyne installed it was somewhat akin to someone removing a plug from a bath tub" said Ian.

It is a common misconception that Aquadyne can only be used as a replacement for secondary drainage systems (i.e. sand or gravel filled trenches). It actually has an open pore structure and performance capacity which is comparable to that of a primary (pipe and pipe and gravel) drainage system. Thereby bringing the simplicity and convenience of a secondary drainage system, butd elivering the capacity and long-term performance associated with much more expensive and intrusive mains (primary) drainage installations. 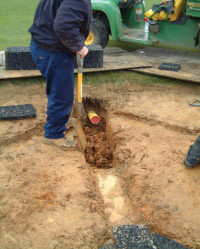 Because Aquadyne is lightweight, less heavy equipment is also required during installation and far fewer trips need to be made across the course.

An installation of 500 metres would (in weight terms) need 2.8 tonnes of Aquadyne, whereby conventional drainage would require 11 tonness of materials to be transported across the course, four times more.

Sales have started to soar after the initial couple of seasons, with many of the early courses that started with trial installations now embarking on extensive projects.

By far the biggest areas to be drained using Aquadyne are bunkers.

Both are now in their fifth season of using Aquadyne, predominantly in bunkers. Nathan Kim Sing, Head Greenkeeper of Sutton Green Golf Club, had tried all the methods of bunker drainage, pipe and gravel, sumps and membrane. None were effective, lasting for only a few years before they failed.

Membranes would get caught by bunker bike rakes and ended up ripped and tatty. Gravel was soon coming up to thesurface and then getting onto greens. Silt and organic matter quickly migrated through the sand and blocked membranes, in effect acting as a pond liner, resulting in flooded bunkers.

After seeing the product at BTME, Nathan decided to give it a trial, initially incorporating pipe and gravel with Aquadyne over the top in the bunkers. This worked but, overtime, has now gone to just Aquadyne laid out in a herringbone fashion in the bottom of the bunkers.

This allows far greater areas of the bunker to be drained, resulting in very quick drainage and far less work raking and pushing washed sand back up the faces of steep bunkers.

Nathan has been using EcoSand, a mix of GS5 sand and recycled glass, it has worked remarkably well and combined two recycled products into the process, a plus if environmental issues are important to the club said Nathan.

In normal conditions the Aquadyne bunkers cope well, but it is with heavy rain where they come into their own, draining exceptionally well with very little work required to fluff up the sand again.A programme of installing the product into all the bunkers on the course is about 50% completed tod ate.

Nathan estimates that, before labour, the cost of installation is about £500.00 per bunker, with the added benefit of it being easier to install and less heavy plant being on the golf course.

Over at Kings Hill Golf Club, Duncan Kelso has been finding Aquadyne hugely increases drainage potential in bunkers,making the product ideal in large shallow bunkers, especially where there is an existing drain that was laid before the bunker was dug out and there is extremely little fall available.

The panels can produce high capacity outfalls. Laid ont heir side they are only 2" deep requiring a shallow trench to lay in,with only sand being put back over them; no other materials are used. 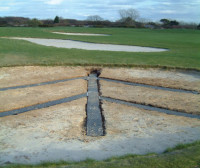 By creating a herringbone design,it is possible to drain all the far extremities of the bunker, moving high volumes of water in very little time.

Duncan also finds that where Aquadyne is the sole drainage in the bunker, linked to a pipe at the edge of the bunker, a sump box constructed by screwing four panels together acts as a great way of joining the herringbone system to the pipe, increasing capacity and acting as an inspection box also.

All new bunkers are made with the Aquadyne system and, of the 80 plus existing bunkers, 20% have now been converted to Aquadyne.

Duncan has found that where soakaways have had to be used in some bunkers, by capping the soakaway with two layers of panels laid at 90 degrees to each other, you can avoid the problems with settlement and incursion of sand into the aggregate, improving the life of the soakaway.

The benefits, as far as Duncan is concerned, are that it's a competitively priced solution, with no gravel being used in the bunkers, reduced traffic on the course and far less compaction issues, along with the flexibility oft he installation allowing an in-house team to complete the workt o their own schedule.

Not only can the product be used for bunkers, Aquadyne has proved very successful for draining wet fairways or springs. Using a pedestrian trencher, it is very simple to create some laterals to join up to a ditch or land drain and remove the problem.

There are also sometimes hidden benefits to using Aquadyne; such as path edgings where it lasts longer than timber and acts as a path edge drain at the same time, or in bunkers where stone migration into the bunker and onto the fairway is eradicated.