0 BUNKERS: A Hazard Lost in the Sands of Time?

When grazing sheep sheltered from cold sea winds in the hummocks and depressions of Scottish linksland centuries ago, no one would have guessed the resulting sandy hole would cause debate in the pages of a golf magazine some 300 years later.

The earliest bunkers formed when these sheep hollows deepened and winds whipped up sand into these shelters on the links of St Andrews and East Lothian. The earliest greenkeepers let the sand remain uneven and lie naturally, while the grasses around the bunker edge were wispy, wild and penal, creating a beautiful yet fiendish hazard. 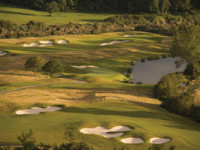 A visit to an early bunker was an encounter with lady luck, with footprints and blast marks the downsides of misfortune, but fates readily accepted by golfers who appreciated they'd gone in a hazard and were due serious penalty.

At the risk of sounding like an antiquated scholar, how times have changed?

More and more modern golf course designs show little evidence that bunkering is still considered a key part of golf strategy and an understated but effective hazard. Lush green courses stretch out into the distance, entire holes flanked by snaking sandy worms, or unusually shaped sand traps, tended to by exhausted greenkeepers with sore backs, while everyday hackers leave these courses confused as to whether they just played golf or ran an endurance race through the Sahara desert.

Bunkering has become the most overused and least understood feature of modern golf course design. It has become a designer's opportunity to lavish praise on themselves with ornamental but meaningless use of land and sand, and sadly a bunker's real purpose has been lost in the sands of time. Placement of bunkers is about strategy, shot by shot, hole by hole, and the strategy of an individual hole should always appreciate the placement of individual bunkers.

Groups of eight or 10 bunkers surrounding the elevated green of a short par-four are like the bracelets and bangles a teenage girl uses to top off her high street outfit, for that night's parent-free party - all style, and frankly, no substance.

The 'Road Hole' at St Andrews, the 17th, golf's toughest par-four, is a hole where the entire strategy - from placement of the drive, to the shape of the second shot - is dictated by the existence of a single bunker, barely spanning 10 feet by 10 feet, short and left of the green.

The Road Hole bunker played its part in thwarting the Open Championship bids of great golfers like David Duval (2000) and Tommy Nakajima (1978, after whom the bunker bears its unofficial nickname, "The sands of Nakajima,") when the Japanese player took four to get out on route to taking a nine and squandering a chance at Open glory.

When the location and site lend themselves to large amounts of bunkering, such as at Kiawah Island, venue for the 1991 Ryder Cup match - a setting by the ocean dominated by sandy wasteland and scrub - then it's appropriate to design with extensive bunkers as a key theme of the course.

When the site isn't naturally sandy and the landforms aren't suited to heavy bunkering, then using this technique appears artificial and manufactured. The natural landforms are a designer's greatest asset and it seems senseless to have bunkering just for the sake of bunkering.

Spare a thought for two groups that suffer greatly at the hands of bunker heavy golf course design, the greenstaff who maintain them, and the higher handicappers who spend lots of time going in them and struggling to get out.

What's more, the worst thing you can have on a golf course, in terms of aesthetics, is untidy scruffy bunkering, and the more bunkers you have the harder they are to keep.

At Thomson Perrett and Lobb, bunkering is something we discuss frequently. Peter Thomson, five-time British Open Champion, and founder of the company, believes strongly that fairway bunkers should not be raked and you should have to work hard, and rely on your short game, to avoid losing a shot after you have driven into a fairway trap. I share his view that every bunker needs to have a clear purpose, and should fit into the challenge of the hole you're trying to create.

On a short par-four, you might place a deep pot bunker by the green to penalise those trying to drive it. It's crucial the designer considers exactly whom they are trying to penalise and what sort of penalty they wish to impose when they design a bunker. In this example, the pot bunker makes it difficult but not impossible to make a birdie for the better player, and at the same time prevents too many eagles being made by longer hitters.

A great example of this is the 'Devil's Aperture' at Pine Valley Golf Club's par-three 10th hole, a deep devilish pot bunker - barely wide enough to take a stance in - positioned short of the green, and fairly so, to catch mishit short irons.

Many of the best golf course designers have had their own interpretations of how bunkers can be deployed on a course to add to the challenges a golfer will face. Harry Colt, designer of Sunningdale and Wentworth, loved to set bunkers well back from the green, known as cross bunkering, to obscure the green front and change the golfer's perception of distance from the fairway.

At Swinley Forest in Surrey, Colt blended heather and bunkering, covering the backs of bunkers with the tough durable fauna and making stunning use of the natural environment.

In the 1960's Pete Dye made the bunkers of his American courses famous by inserting railroad ties into the faces, mimicking the old Scottish tradition of riveting the faces (so done to prevent the Scottish winds blowing sand from the bunkers), but stopped this trend in the 1980s when it was too frequently copied. Robert Trent Jones Snr loved to mark his courses with the larger, maple leaf shaped sand traps that had three jagged edges, making it possible to get difficult trapped lies under the lips of the three edges.

These designers may have added character to their bunkering but it was always strategy that determined their placement.

The flow of a golf course is another crucial factor in determining how a designer will construct their bunker complexes. The course should flow well from hole to hole and have a balance in terms of testing holes and easier holes that present an opportunity to score well or pick up shots.

Setting a bunker or bunkers 30-yards short of the green on four straight holes would ruin the flow of a golf course and unfairly punish the shorter hitters. Ultimately, the experience of playing a golf course should still be enjoyable, as well as challenging.

Today's modern golfer has an expectation that when his ball goes into a bunker, it should be raked, soft, sandy and present them with an ideal opportunity to blast the ball out close to the hole. This is the downside of creating visually pleasing, perfectly manicured bunker structures - they have clearly lost that element of hazard and fortune that initially defined them.

A perfect example of this is the disappearance of the 'pot bunker' from modern course design. Modern golf courses increasingly use bunker-raking machines to produce the perfectly smooth raked surfaces. In order to do this, the bunker must be at least four metres wide for the machine to turn and the base can be no narrower than four metres, making the minimum dimension quite flat and preventing steep sidewalls being used. As such, there are few new courses built with pot bunkers, which is sad given the terrible hazard these bunkers present.

I'm always fascinated when playing links golf and watching as a slightly off-line iron shot is collected up by a swale and hollow and the offending ball runs down to a small secretive pot bunker.

The use of larger catchment areas to feed bunkers is a much used design element on links golf courses and less achievable on grassy inland courses, but it would be more interesting to see this tactic used as opposed to phalanxes of white sand traps dominating the landscape ahead of every green.

Bunkers are like golf itself - best kept simple - and like a simple rhythmic repeatable swing, can be an understated but deadly part of golf. Next time you are out on the course, ask yourself what part the bunkers play in the strategy of the hole, and if it's not obvious, then it's probably just there for show.