by External source
in Cricket, People, and Industry News
on 14 Oct 2015 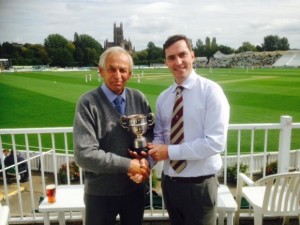 Burghill & Tillington Cricket Club groundsman Les Gibson has been presented with the Rob Staite Trophy for services to cricket in the county.

Gibson has worked at the village club for the past 15 years and last year was named Worcestershire County Cricket League's groundsman of the year,

Burghill also picked up the ground of the year prize.

More than 20 people who volunteer there help at various cricket clubs were invited to Herefordshire Cricket's Reward and Recognition Day at New Road, home to Worcestershire County Cricket Club.

But Les picked up the main trophy on the day.

"Les Gibson has been involved as a volunteer at cricket clubs for over 40 years and has worked tirelessly at Burghill & Tillington Cricket Club for the last 15 years for the benefit of others," said Burghill chairman Steve De Souza.

"Over the years, he has fulfilled many roles and quietly given countless hours of his time and money to support the club.

Read the full article from the Hereford Times HERE