National Hunt racing in the UK is divided into two distinct branches; Hurdles and Steeplechase. Alongside these there are 'bumpers', which are National Hunt flat races.

The biggest steeplechase events of the year in the UK are generally considered to be the Aintree Grand National and the Cheltenham Gold Cup. Most of the National Hunt season takes place in the winter when the ground is softer and more suited to jumping.

There are forty-one jump courses in the UK, of which Towcester in Northamptonshire is one.

Laurence Gale pops up to meet the groundscare team

Set in beautiful parkland, Towcester Racecourse is considered to be one of the most picturesque racing, hospitality and events venues in the country.

The racecourse offers a wide range of facilities for both corporate guests and private individuals. Towcester is a privately owned by Lord Hesketh.

There are two main hospitality facilities - the Grace Stand and the Empress Stand, both offering commanding views of the racecourse and countryside beyond. The award winning Empress Stand was part of a seven million pound investment, completed in 2005, and includes a glass fronted restaurant. Also upgraded, at around the same time, was the stable block, now considered to be one of the best equipped in the country.

The racing circuit is a one and three quarter mile, right-handed track with ten fences per circuit. The final six furlongs are a gruelling ascent to the finishing line, making Towcester the most testing National Hunt track in the country.

The course dates back to 1876 when Her Imperial Majesty, Elizabeth the Empress of Austria, stayed at Easton Neston the stately home, the grounds of which became the setting for the course. The Empress was a keen rider and passionate about hunting, enjoying days with the Duke of Grafton's foxhounds.

The then owner of Easton Neston, Sir Thomas Fermor-Hesketh, formed a committee made up of local landowners and farmers to manage the fixture.

In 1928, the first Lord Hesketh formed the present company, and established the racecourse under National Hunt Rules. Towcester Racecourse has remained in the ownership of the Fermor-Hesketh family ever since.

What makes Towcester unique is that, apart from two meetings a year, on Boxing Day and Easter Sunday, entry to watch the racing is free.

Seventeen meetings are held from October to May. The Clerk of the Course is Robert Bellamy who has been at the course some six years. A former jockey, he is in charge of a small team of five who look after and manage the course.

The team is headed up by Head Groundsman Keith Bower. He has been at Towcester for twenty-five years and is also a retained fireman. His son Connal has been part of the team for the past five years. Other members are Chris Mulvana (8 years), John Curtis (8 years) and Ian Prestiege (6 years).

Another key member of staff is Charlie Causebrooke, the Stableyard Manager, who looks after the stables. He is quite a character and a very valuable member of staff. As always, the welfare of horses are paramount, both off and on the track.

I was met by Robert who was very keen to show me around. Our first port of call was the stables, then on to the main stand to get a view from Lord Hesketh's private box. From here it is possible to see the whole track. It was at this point we met up with Keith for a walk of the one mile six furlongs course.

During the walk, we were able to talk about the maintenance regimes carried out during the year.

Keith explained that the make-up of the underlying soil profile dictates the way the course is maintained. Here, it is a heavy blue clay that is particularly difficult to manage, especially during wet periods. Its shrink and swell characteristics in the summer creates large cracks which, Keith says, is

actually a benefit as it provides a natural method of aerating the course.

Once the racing season has finished in May, Keith scalps the sward to expose the soil to the elements. This not only helps enhance the soil cracking process but also reveals any low and damaged areas which are repaired using 150 tonnes of Whitemoss topdressing.

The whole course is then oversown with 120 bags of perennial rye grass, but is not generally watered during the summer months as they want the track to crack up to provide the natural aeration.

Keith has two tow-line boom sprayers to apply water to the course, being drawn from the adjacent river. They have an extraction licence for 63,000 cubic metres, a quantity he rarely has to use. With the course being so undulating, other types of watering systems are not suited to these grounds. The biggest problem, Keith explains, is maintaining water pressure up the hill to the last straight.

As at all racecourses in the UK, Robert has to maintain a safe and consistent going. Because of the heavy clay, this is generally maintained between good and soft. Robert has to declare the going at set times - several days before, a day before and on the morning of the race. He uses a Turftrax electronic going stick.

The grass is mown on a weekly basis during the summer months, using an outfront Votex rotary mower. A large blower is fitted to the rear of the tractor to disperse any arisings that may be left after cutting.

The height of cut is maintained at 75mm during the summer months and allowed to rise to 150mm for the start of the racing season in October. It takes two days to cut the track. Keith generally stops mowing in November with the aim to keep as much grass on during the winter months.

Keith implements a fairly simple granular feeding programme based on spring, summer and autumn/winter applications. Being on clay, nutrients are held well due to the strong cation exchange capacity.

As we walk the course, you get a real insight of the challenges facing the horses when they race at Towcester, especially when going downhill! One of the steeplechase fences is fondly known as the Ski Slope, and is regarded as one of the toughest fences on the racing circuit.

The course has ten permanent steeplechase fences set on the outside perimeter of the track, whilst a further ten fences are placed on the inside of the track for hurdles races.

These fences are repaired on a two year rotation programme, with five receiving a complete rebuild each year, whilst the five others are topped up with new materials.

As mentioned earlier, Keith relies on the shrinking and swelling characteristics of the clay soil during the summer months to help decompact the soil. They have, in the past, tried to relieve compaction using both solid tine and linear aeration equipment. However, the timing of the operation has to be perfect as, often, the soil is too hard in the summer months and too wet in the winter to use these techniques - and it also comes at a cost.

Localised piped drainage schemes have been installed but, again, due to the heavy clay they soon capped over and became redundant.

After racing, the first job is to repair any divots. A team of fifteen come in for three days to fork up any depressions, and apply a divot seed mix to repair damaged areas.

Keith's favourite bit of kit is his Cambridge roller, an essential piece of equipment that helps restore levels after racing, particularly in the winter months when the clay soils are pliable.

We were now at the far side of the course and beginning the long assent to the finish line, a tough climb some six furlongs long. It is this that makes the course at Towcester such a challenge.

With most of the newly sown seed having germinated and established, one of the last jobs to complete out on the course is the application of a selective weedkiller to control any weeds, particularly plantains which can cause problems if left to get too large.

Keith employs a landscape contractor to mow all the other amenity grass areas around the site, including the parade ring. It is vitally important the course always looks its best because, even in the closed season, many events, including weddings, conferences and other sporting events are hosted. Last year, Towcester was the venue for the 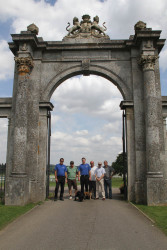 After a long last hike up to the finish line, one of the last jobs for me was to get a team photo of all the staff, standing in front of, what must be, one of the grandest entrances to any sports venue.

Robert has a very dedicated team at Towcester and is extremely proud of what has been achieved. Like most top venues, it is all about team work.

If there is a wish list, Keith would like a new tractor, whilst an automated pop up watering system wouldn't go amiss. Robert agrees that this would be a good asset but, based on currents costs, is not a priority at the moment.

Robert would also like a canter down installed, a new weighing room facility and, more importantly, to add three additional fixtures to the Towcester calendar to increase revenue.

In the grand scheme of things, these are all achievable over time. I am left with the impression that the team will make them happen.