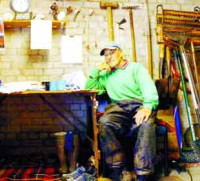 A 67-year-old cricket club groundsman chased a burglar who stole items from a storage room.

Police have praised Derek Carter for his efforts but the pensioner said he didn't think he was "plucky".

And he said he would do the same again after he gave chase to the burglar at Burnley Cricket Club on Monday.

Derek, of Raygill Avenue, Burnley, was cutting the grass in the field at the club, in Belvedere Road, when he saw the burglar walk past him at 1.30pm, carrying items from the club's storage area.

The grandfather-of-four chased the man when he realised the man had taken items, including his ruck-sack, from the garage.

He said: "The fact that it might have been dangerous just didn't cross my mind.

"I don't think was plucky at all. I think anyone would have done the same.

"I just wish I had caught up with him but he was able to get away."

Derek, who has been a groundsman for 13 years, initially saw the man squeeze past a hedge near the club.

The burglar then walked down a path, close to where Derek was working, five minutes later with the items slung over his back.

He ran to the garage, which had ground maintenance equipment including lawn mowers and a wicket roller, and discovered the theft.

He said: "I ran after him but he was partially over the gate already.

"He squeezed through the bushes and by the time I made it up to the path he had disappeared.

"He was an opportunist, it wasn't planned or he would have brought a 10-tonne lorry to take all our equipment."

The burglar escaped into nearby streets with the haul, valued at £537.

The rucksack had credit cards, debit cards, £90 cash, his wallet, a wage cheque and four Clarets tickets; two for the home match against Fulham and two for an away game with Swansea.

Burnley Football Club have replaced the tickets for the home game.

Sgt Phil Carter said officers are now hunting the burglar, who is described as bald except for blond hair at the sides, 5ft 8ins tall , aged 40-50, and wearing a black tracksuit jacket with a red flashing down the arm.