by External source
in Industry News
on 04 Oct 2012 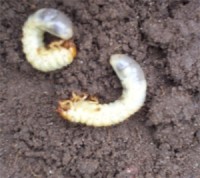 Chafer grubs - the larvae of the chafer beetle - have been giving gardeners and greenkeepers a massive headache over the past couple of months as devastating damage has been caused to well-cared for lawns.

The grass around the central flower beds at the historic Abbey Gardens in Bury St Edmunds has been affected as well as the croquet lawn at National Trust's Ickworth House at Horringer, the tee boxes at Bury St Edmunds Golf Club and the bowls green at St Edmundsbury Bowls Club. And no doubt there are more.

Some of the damage is caused by the grubs chewing at the roots of the grass, but much is by birds and animals scratching away at the soil searching for the juicy snack.

The Abbey Gardens was affected by the problem last summer, but parks manager for the borough Damien Parker said: "It's later this year and it's a worse scenario this year as well."

Last summer visitors to the award-winning gardens thought vandals had wreaked havoc on the lawns, but this year signs are in place at the location informing the public of the problem.

Mr Parker said they had tried chemical approaches which had failed so they are now using a biological organic control called nematodes to destroy the grubs. Nematodes do not pose a risk to wildlife.

He said it was disappointing the grass looked in such a state, but added: "I think hopefully we can get it under control in time for next season."

He said this year the problem was across the board, adding how the borough council had been contacted by clubs as well as residents with lawns damaged by the grubs.

Ickworth has suffered from the problem before, but Sean Reid, outdoor manager at Ickworth, said this year the area worst affected was the croquet lawn.

He said this lawn was used occasionally, mainly during wedding receptions. "It's not having any adverse effect on the use, but it's looking horrible."

Ickworth is also using nematodes, which Mr Reid recommended for anyone else with the issue.

Fortunately for St Edmundsbury Bowls Club in Minden Close, Bury, the outdoor bowling season has just finished so play has not been affected. And at Bury St Edmunds Golf Club the greens and fairway are unscathed.

Chafer grub adults - chafer beetles - lay eggs in June which then develop into the grubs in July and feed on grass roots until October. The grubs dig deeper into the soil over winter until May when they surface to fly.