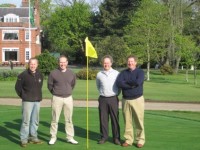 Bush Hill Park Golf Club in North London decided to dig up, reconstruct and open their 18th green within a 9-week period. Greg Evans MG was commissioned to oversee the project that also included new fairway bunkering on the 2nd hole and a back tee on the 14th.

Previously there had been issues with flooding on the 18th green. The decision was taken by the club in February to bite the bullet and rebuild. As Bush Hill's Director of Golf Lee Fickling explains, 'as a club we believe our members deserve to putt on the best greens in the area. All of our greens apart from the 18th are dry and smooth all year round.

The fact we could take out our old green and have a new more challenging green within 9 weeks was an exciting venture for us and to open on time with a very dry surface that read 10 feet on a stimp meter met all of our expectations.'

Huge challenges were faced by all. Because of the approaching golfing season there had to be a fast turnaround. As Greg explains, 'The club had a very busy May planned with members' competitions taking place and several golf societies booked.

We began discussions about the project in mid-February so we had to act fast. Ricky Willison, a former European Tour player was appointed as designer and Quattro UK (led by new recruit Oliver Flannagan) as the contractors. We started removing the Poa sod on the 5th of March and had that turf back down 3 weeks later. This gave us 6 weeks to get it to championship standard. 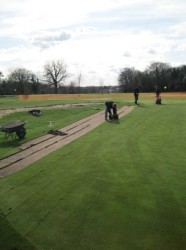 The Bush Hill Park staff lead by Course Manager Graham Careford, were in charge of the grow. After six weeks of intense feeding, sanding and cutting, the green opened on the 7th of May for their charity day stimping at 10 feet. We were all very happy with the result!'

The new 18th green has been moved back 25 yards giving the par 5 last hole extra length. The green now consists of a three-tier design with a championship back right tier. Included in the design were three new bunkers with a back bunker added to improve the visual effect for visitors driving to the Georgian styled clubhouse.

Lee concludes, 'as a club we are looking forward to implementing a long-term strategy to keep upgrading the quality of our course. Greg and his team will be our natural choice as the quality of their work and delivery of the project has been spot on.'